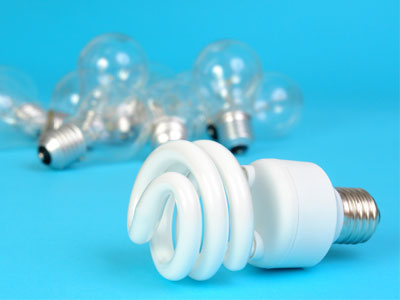 As the symbol of innovation, the incandescent light bulb is not very innovative. It hasn't changed much since Thomas Edison introduced it in 1879. Even today, it still generates light by heating a tungsten filament until it reaches 4,172 degrees Fahrenheit (2,300 degrees Celsius) and glows white-hot. Unfortunately, all of that white light is not very green. A good deal of electricity -- electricity from coal-fired powered plants responsible for spewing greenhouse gases into the atmosphere -- is required to make an incandescent bulb burn brightly. Only 10 percent of that juice goes toward making light. The rest is wasted as heat.

Luckily for our CO2-soaked planet, there's a new type of light bulb that stands poised to replace Edison's most famous invention as the icon of ideation. It's known as the compact fluorescent light bulb, or CFL, and its illumination comes by way of a much different mechanism. Instead of a glowing filament, CFLs contain argon and mercury vapor housed within a spiral-shaped tube. They also have an integrated ballast, which produces an electric current to pass through the vaporous mixture, exciting the gas molecules. In older CFLs, it took several seconds for the ballast to produce enough electricity to ramp up the excitation. Newer CFLs have more efficient ballasts and require a shorter warm-up. Either way, when the gas gets excited, it produces ultraviolet light. The ultraviolet light, in turn, stimulates a fluorescent coating painted on the inside of the tube. As this coating absorbs energy, it emits visible light.

Believe it or not, CFLs are the descendants of the lightsaber-shaped fluorescent bulbs that still flicker in garages and workshops all over the world. But these are not your father's fluorescents. Despite their heritage and their similarities to incandescent bulbs -- they both require electricity, they have a glass cover, they have a threaded base -- CFLs are emerging as the biggest thing in interior illumination since the candle.

This article will explain what all the fuss is about. It will examine the good, the bad and the ugly of CFLs so that you can use them with confidence. Let's start with the good -- the many benefits that come from using compact fluorescent bulbs.

The benefits of CFLs have been grabbing headlines for the last two to three years. Indeed, if you were to focus only on the buzz surrounding CFLs, you might think that changing out your incandescent bulbs in favor of their spiral cousins would be a complete no-brainer. As we'll see later, CFLs do present some challenges and concerns. But their benefits are far more numerous.

First, CFLs use significantly less energy -- 75 percent less energy than incandescent light bulbs. That means CFLs require less wattage to produce an equivalent amount of light. For example, you could use a 20-watt CFL and enjoy the same amount of light as a 75-watt incandescent. If every home in America made one such swap, enough energy would be saved in one year to light more than 3 million homes [source: ENERGY STAR].

Of course, if you're using less energy, your energy costs are going to go down. Replacing a standard 60-watt bulb with a 13-watt CFL can save a single household $30 in energy costs over the life of the bulb [source: General Electric]. Even with the higher price tag of CFLs -- you'll pay $2 to $4 for a CFL versus 30 to 40 cents for a typical incandescent bulb -- they still save you money. That's because CFLs last a long time. In some tests, they burned brightly for 10,000 hours, whereas standard bulbs burned for just 800 to 1,500 hours [source: Johnson].

The environment comes out ahead, too. A good deal of electricity coming from coal-fired power plants gets directed to the lamps and light fixtures inside your house. If you're saving energy by using CFLs, then you're pulling less electricity from the power grid. This reduces the amount of coal that must be burned, which reduces emissions of greenhouse gases. In a single year, the use of CFLs over incandescent bulbs removes as much greenhouse gas pollution as taking 2 million cars off the road [source: ENERGY STAR].

These would be dubious benefits if CFLs didn't perform well or couldn't be used in many applications, but they are, in fact, quite versatile. Several manufacturers make compact fluorescent light bulbs that can be used with dimmer switches and in three-way lamps. And many CFL bulbs can be used outdoors as long as the fixture is enclosed. Most importantly, they give off good light. In a 2007 study conducted by Popular Mechanics, CFLs burned almost as bright and produced a better quality light than a 75-watt incandescent bulb [source: Masamitsu].

CFLs are not worry-free, however. Up next, we'll look at the biggest worry -- an element toxic to living things.

Now for the Bad: Drawbacks of CFL Bulbs

Compact fluorescent light bulbs may be versatile, but they do have a few issues that put people off. First, they deliver their best results when left on for 15 minutes or longer. Switching CFLs on and off will shorten their life and may decrease their efficiency, mainly because the excitation of the gases and of the fluorescent coating take some exposure to an electric current to reach an optimal level. CFLs are also inefficient in enclosed, recessed fixtures (too hot) and in the fixtures of garage-door openers (too much vibration). Finally, CFL bulbs can, in rare cases, interfere with electronic equipment. This interference is caused by infrared (IR) light, which CFLs produce and which IR readers can interpret as a signal.

If there is an ugly truth about CFL bulbs, it's the mercury they hold within their glass covers. Mercury is a persistent and highly toxic chemical. Most humans are exposed to the poison by eating fish contaminated with methyl mercury. However, it's also possible to inhale elemental mercury vapor, like the kind used in compact fluorescent light bulbs. To see which is a bigger deal -- fish or fluorescent -- check out this related HowStuffWorks article.

So why is it there, and why don't CFL manufacturers use something else? As we mentioned earlier, mercury vapor is required to convert electrical energy to radiant energy. When stimulated by electric current, mercury vapor inside a CFL produces ultraviolet light, which is re-radiated as visible light when it strikes the fluorescent compound, known as phosphor, painted on the inside of the bulb. No other element has proved as efficient in this process, so even though the amounts of mercury used in bulbs has decreased over time, a small amount of mercury is still required for CFLs to function properly.

It's important to keep this in perspective. One CFL bulb typically requires approximately 0.000176 ounces (5 milligrams) of mercury. Older home thermometers contain 100 times that amount (0.0176 ounces or 500 milligrams), and many manual thermostats contain 600 times that amount (0.106 ounces or 3,000 milligrams) [source: GE Consumer & Industrial Lighting]. So, a single CFL bulb has very little mercury. And none of the chemical is released as long as the bulb remains intact.

A broken CFL bulb, however, can expose a person to mercury vapor. A tiny amount of solid mercury powder can also be released. For these reasons, extra caution should be taken when cleaning up a broken CFL. The U.S. Environmental Protection Agency (EPA) recommends following four easy steps:

This should take care of a broken bulb. Up next, we'll look at what to do with a CFL bulb that burns out.

The good news is that CFLs, although they contain mercury, actually help eliminate mercury from the environment. That's because mercury is also found in coal. Burning coal releases the toxin into the environment. Energy Star estimates that a coal-fired power plant produces 13.6 milligrams of mercury to power one 60-watt incandescent bulb, but only 3.3 milligrams to power an equivalent CFL bulb. 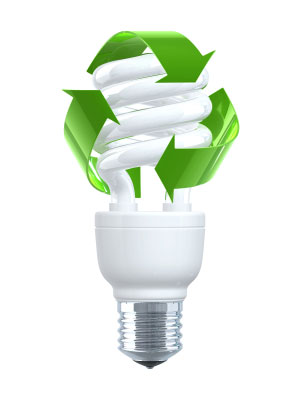 So what do you do with a burned-out CFL bulb if it contains mercury? First, you should realize that compact fluorescent bulbs are considered hazardous household items, a category that also includes paint, batteries and thermostats. You must dispose of such items properly, which means you can't simply throw them away in household garbage.

To find out your options, start by calling your local waste management authority. You can also call 1-800-CLEANUP, a service provided by Earth911 that allows anyone with telephone access to search the organization's database of 100,000 recycling and hazardous waste collection locations for more than 170 different materials. You can search the same database online at www.earth911.org.

More and more retailers are stepping up to help with CFL bulb recycling. IKEA was the first retailer to provide free disposal and recycling of used CFLs. The Home Depot joined IKEA in 2008 by launching a national in-store consumer CFL bulb-recycling program in all of its nearly 2,000 locations. Some Ace and True Value stores are offering similar programs.

As recycling becomes easier, the CFL revolution will only gain momentum. Many think that the spiral-shaped bulbs will be a brief evolutionary step toward the even more efficient light-emitting diode (LED) bulbs. A 1.3-watt LED bulb uses less electricity than a 9-watt CFL and can last for up to 11 years [source: Peterson]. Better yet, it doesn't contain an atom of mercury.

But even LED bulbs have their tradeoffs. They're not very bright, and they're exorbitantly expensive. Until manufacturers overcome those two issues, CFL bulbs will likely have the spotlight all to themselves.

What are eco-drones?
How High-yield Paper Works
How Fastronauts Will Work