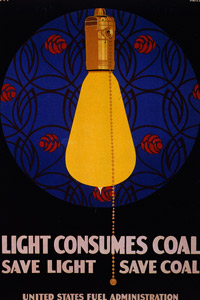 Energy-efficiency has been popular since at least 1918, when this poster was published by the U.S. government.
Image courtesy MPI/Getty Images

An LED is what's called a "solid-state lighting" technology, or SSL. Basically, instead of emitting light from a vacuum (as in an incandescent bulb) or a gas (as in a CFL), an SSL emits light from a piece of solid matter. In the case of a traditional LED, that piece of matter is a semiconductor.

Stated very simply, an LED produces light when electrons move around within its semiconductor structure.

The problem with LEDs as primary home lighting is that while they emit a lot of light, the structure of an LED causes some of that light to get trapped inside. So an LED bulb has traditionally been dimmer than an incandescent bulb, and most people want their lamps and ceiling fixtures to be pretty bright.

Recently, though, LEDs bulbs have brightened up. You can now find LED replacement bulbs that emit light equivalent to a 60-watt incandescent light bulb, which makes them a viable technology for basic lighting needs at home.

And in some ways, they're much more than viable: An LED replacement light bulb called GeoBulb emits 60-watt equivalent light using 7.5 watts of power [source: Sundance].

And in other ways, less than viable: A 60-watt-equivalent LED bulb costs about $100.

Which brings us to the pros and cons of LED light bulbs.