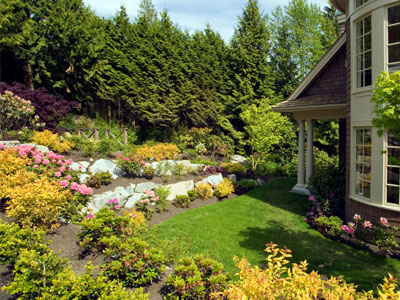 A waterless, composting toilet can help you save water and improve your garden.
© iStockphoto.com/laughingmango

An advertisement for a composting toilet might simply state, "First it's poop, then it's plant food." And that's pretty much it in a nutshell -- you start with excrement and eventually get fertilizer. So, how do you get started? The first decision is whether to buy or build the toilet. A dozen or more companies sell prefabricated, waterless composting toilets. Home versions can cost anywhere from $850 to as much as $4,000 [source: Ecovita, EcoTech]. A prefabricated toilet usually comes with the assurance of being sanitary. It includes reliable instructions for installation and for tending to the compost.

Do-it-yourself systems can cost as little as $25, if you use a bathroom bucket and outdoor composting heap [source: Jenkins]. Web sites and books rush to tell you how to make one. They don't, however, guarantee that your system won't leak, stink, draw insects or animals, be a health hazard or be illegal. So choose your instructions wisely.

Another decision is choosing between self-contained and remote systems. What you choose depends on your bathroom layout, the number of users and where you want the compost. In a self-contained toilet, the waste composts in your bathroom, inside the toilet. In the Envirolet version, for example, up to six people use it continuously, each tossing in their toilet paper and carbon-rich cover, like peat moss, after each use [source: Envirolet]. The waste breaks down in the toilet. You check it but otherwise leave it for three to six months [source: Envirolet].

In remote systems, the toilet is in your bathroom, but the waste falls down a chute to a composting bin. The bin is in a crawlspace, on the floor below or outside. More people can use these more heavily. For instance, eight people can use Envirolet's remote toilet full-time [source: Envirolet]

During composting, your excrement and the organisms in it are transformed by the temperature, moisture, oxygen, nutrients and bacteria in the compost pile into mature compost, a fertilizer containing microbes different from those that left your digestive tract. Different systems accomplish composting differently. For example, most commercial toilets are set up for slow, low-temperature composting (below 98.6 F or 37 C), which kills most disease-causing organisms in months, giving you fertilizer that's safe for ornamental gardens. For fertilizer that's safe for food-producing gardens, you'd need a high-temperature composting system where the compost cooks at a temperature from 131 F to 140 F (55 C to 60 C) for several hours so that it basically kills all human pathogens [source: Jenkins].

Composting toilets can use power or not. Powered toilets often have fans and heaters that evaporate some urine and aerate the waste to speed composting. The toilets can usually run without power on a plain ventilation pipe. Composting may then be slower, limiting your toilet use by up to half [sources: Envirolet, Envirolet]. Whether it's powered or not, if your toilet composts indoors, you'll need to cut a hole in your roof for the ventilation pipe.

You can also choose whether to separate urine and feces. Usually, they'll drop into the same composting receptacle. But urine-diverting composting toilets have a seat that catches urine. The seat funnels the urine through a pipe that connects to your shower and sink outflow pipes, to a homemade pit or wetland in your backyard, or to a tank, where's it's diluted and can connect to a garden hose. But while you can spray your lawn with diluted urine in Sweden, it's likely against local laws in the United States [source: Ecovita].