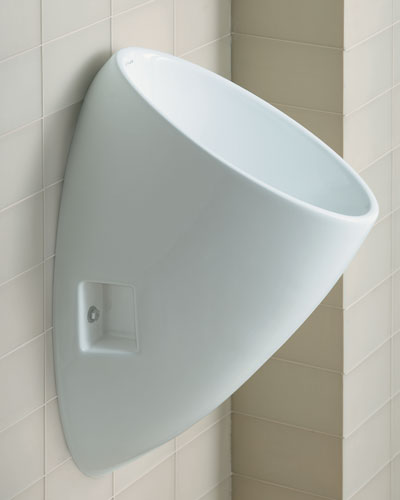 The Steward waterless urinal is installed in the New York Mets' Citi Field Stadium, the Georgia Aquarium in Atlanta, the Shedd Aquarium in Chicago and the Proximity Hotel in Greensboro, N.C.
Kohler Co.

A discussion of waterless toilets wouldn't feel complete without covering waterless urinals. Men could argue that in emergencies the roadside qualifies as such. But companies do make them -- waterless urinals for the bathroom.

You'll find waterless urinals in crowded public restrooms. Building owners saw that by using dry urinals, they'd save money on water and sewer charges for thousands of flushes. They're installed in the New York Mets Citi Field Stadium and the Shedd Aquarium in Chicago, says Mark Mahoney, a marketing representative for Kohler Co. Waterless urinals are also popping up in states that suffer droughts. Arizona made waterless urinals mandatory in its state buildings in 2005 [source: Sloan].

You can also buy a waterless urinal for your home. Mahoney says his company has sold them for entertainment rooms that he calls "man caves" and to families with several boys. A family with four males, each flushing the 1.5-gallon (5.7-liter) toilet three times a day will save 6,552 gallons (24,802 liters) of water a year by installing and using a waterless urinal [source: ZeroFlush].

Waterless urinals look like regular urinals without a pipe for water intake. Men use them normally, but the urinals don't flush. Instead, they drain by gravity. Their outflow pipes connect to a building's conventional plumbing system. In other words, unlike a composting toilet, which leaves you to deal with your waste, these urinals send the urine to a water treatment plant.

Urinal designs differ by the technology in the drain. For $40, Ecovita sells a plastic basin whose pipe plugs into the wall plumbing [source: Ecovita]. Other companies put a trap (it's a cup) in the drain, which they say stifles urine odors. You fill the trap/cup with water and a proprietary liquid -- usually oil. The liquid simply has to float on the water. The urine sinks, and associated gases can't rise through the oil. A model like this costs from $370 to $600 [source: ZeroFlush, Falcon]. You do have to replace the traps, from every three months to 7,000 flushes, which costs money [source: Falcon, Sloan].

Companies such as Kohler Co. don't use traps but instead put the water and oil in the drain pipe. But trap or none, you periodically clean the urinal by pouring gallons of water down the drain and replacing the proprietary oil, which is neither cheap nor entirely waterless.

For more information, explore company Web sites and temper your do-it-yourself impulse with research on how to build a safe system. Soon, you could be saving water as your neighbors wonder why your garden is blooming so lushly.