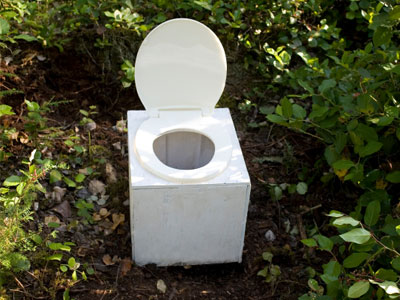 While the term "waterless toilet" might bring to mind an outdated outhouse, it's actually a modern household appliance that can help you conserve water. See more green science pictures.
© iStockphoto.com/mikespics

You probably visit the restroom several times a day. While you're there, do you ever consider the technology at work around you? And do you ever think about how much water is used to make it all work? The world, in fact, flushes up to 20 percent of its drinking water down various drains [source: Waterless]. That's a lot of water going to waste.

In addition to the obvious -- water conservation -- there are many other answers to the question, "Why waterless toilets?"

In developing countries, waterless toilets can provide sanitation on little infrastructure and are doubly helpful in regions prone to droughts. Homeowners in Death Valley might like the idea of not flushing drinking water down the toilet. New Yorkers might like the idea of saving money that would otherwise pay for expanding congested sewer systems and wastewater treatment plants. If you're moving to the backwoods and don't want to buy a septic system, a waterless toilet could work.

What a waterless toilet will mean for you, the toilet owner, is that your toilet won't flush with water. In most cases, except for today's waterless urinals, the toilet doesn't connect to a city's water grid. The waste doesn't go to a water treatment plant. Instead, you take care of the waste.

Does it sound disgusting? Suppress your memories of smelly camp latrines; modern waterless toilets aren't like that. As you'll soon learn, instead of the waste becoming a rank mess, in these toilets, the waste can become harmless or even able to do work for you.

Do you want to find out how? Read on.