Browse the article How the Future Force Warrior Will Work 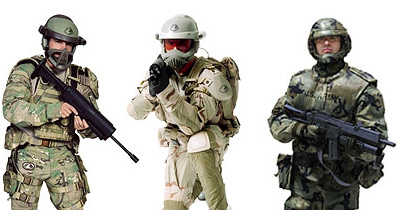 Wars are evolutionary, with each new conflict bringing more powerful and advanced weaponry. Weapons that yield success on the modern battlefield today can quickly become outdated and ineffective in just a few years. The reality of the battlefield necessitates continuous change in the pursuit to stay a step ahead of the enemy.

To better equip its soldiers, the U.S. Army is developing an advanced infantry uniform that will provide superhuman strength and greater ballistic protection than any uniform to date. Also, using wide-area networking and onboard computers, soldiers will be more aware of the action around them and of their own bodies.

In this article, we will leap onto the battlefield of the future, see how its technology compares with today's and learn how the Future Force Warrior will turn a soldier into an "F-16 on legs."

Thank you to 1st Lieutenant John H. Frushour, USMC, 24th Marine Expeditionary Unit, for his assistance with this article.

Suiting Up For Battle

With the development of a bionic uniform for its soldiers, the U.S. Army is planning for a change in the logistics of war. Integrated physiological monitoring, enhanced communication and augmented physical strength will give the soldiers of the future the tools they need to overwhelm their opponents simply by donning a hi-tech suit.

There are two phases to the Future Force Warrior program. The first phase involves the deployment of a uniform in 2010 that will meet the Army's short-term needs, although pieces of the uniform may be deployed earlier. According to Future Force Warrior Equipment Specialist Jean-Louis "Dutch" DeGay, "The Department of the Army has built what's called design spirals, so roughly every two years, if a piece of technology has matured, we try to get it in the field, rather than waiting until 2010 to field the entire system." In 2020, the U.S. Army will roll out a suit that integrates nanotechnology, exoskeletons and liquid body armor, all of which exist only in concept now.

Here are the basic components of the final version of the suit:

Together, these subsystems combine to create a uniform that informs, protects and enhances the abilities of its wearer. Now let's take of each of these components separately.

The value of enemy reconnaissance depends on how quickly that information can be relayed to the soldier on the battlefield. The soldiers of the future will have more information immediately available to them than ever before.

The U.S. Army currently employs a system called Blue Force Tracker (BFT). The system enables a commander to get a real-time picture of the battlefield from his or her personal computer. The commander can then track individual unit movement and provide this information to friendly units. The U.S. Marines have used BFT, although they initially opted for a more portable and rugged system called the Enhanced Position Location Reporting System, or "ePLRS." Both ePLRS and BFT share the same goal: real-time tracking of friendly forces. The downside to both systems, however, is that they are bulky, somewhat dated and require computers with operators who could otherwise be carrying a weapon.

The Future Force Warrior setup is a significant improvement on these current systems. A computer embedded in the suit and located at the base of the soldier's back will be connected to a local and wide-area network, allowing for data transfer.

DeGay explains it this way:

Essentially, it's what we call the "borg" effect, to borrow a theme from Star Trek. Everything in the battle space is a sensor, whether that's a vehicle, rotor wing, fixed wing, aviation vehicle, ground vehicle, individual soldier or unmanned robotic platform. That becomes a sensor that I can track for data. I can send data to it or take data, video or audio from it.

Soldiers will utilize a voice-activated, drop-down screen in the helmet to access information without having to put down their weapons. Embedded in a pair of transparent glasses, the display will appear to the soldier as a 17-inch screen. This screen can display maps and real-time video provided by a forward-positioned scout team, satellite or aircraft. According to DeGay, "We are working to have the graphic user interface inside the computer systems to either replicate computer graphic user interfaces or even Playstation 2/Xbox graphic user interfaces," because most of today's soldiers are already familiar with how those systems work.

Not only will Future Force Warriors know more about their fellow soldiers, but they also will know more about their own physiological condition. The physiological subsystem of the uniform lies against the soldier's skin and includes sensors that monitor soldier's core body temperature, skin temperature, heart rate, body position (standing or sitting) and hydration levels. These statistics are monitored by the soldier and by medics and commanding officers who might be miles away. Knowing the condition of a platoon of soldiers allows commanders to make better strategic decisions. The Future Force Warrior helmet also includes a GPS receiver, providing commanders with exact positioning data on their troops.

Another vital component of battle is communication between soldiers. The Future Force Warrior will use sensors that measure vibrations of the cranial cavity, eliminating the need for an external microphone. This bone-conduction technology allows soldiers to communicate with one another, and it also controls the menus visible through the drop-down eyepiece. The helmet has 360-degree situational awareness and voice amplification.

"What this will allow you to do is to know where that sniper round or mortar round came from, but at the same time it will cancel out noise at a certain decibel so as to not cause damage to the soldier's ears," said Robert Atkinson, liaison sergeant, operational forces interface group, Natick Soldier Center.

Powering the entire suit is a 2- to 20-watt microturbine generator fueled by a liquid hydrocarbon. A plug-in cartridge containing 10 ounces of fuel can power the soldier's uniform for up to six days. Battery patches embedded in the helmet provide three hours of back-up power. 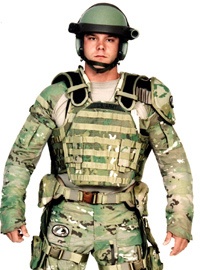 Superhuman strength has always been confined to science fiction, but advances in human-performance augmentation systems could give soldiers the ability to lift hundreds of pounds using the effort they would usually use to lift a fraction of that weight.

In the shoulder of the Future Force Warrior uniform is a fabric filled with nanomachines that mimic the action of human muscles, flexing open and shut when stimulated by an electrical pulse. These nanomachines will create lift the way muscles do and augment overall lifting ability by 25 to 35 percent.

The exoskeleton attached to the lower body of the soldier will provide even more strength. The overall exoskeleton will provide up to 300 percent greater lifting and load-carrying capability.

"The Exoskeleton, which is in conjunction with DARPA, will give the soldier more stability," Atkinson said. "It makes the soldier become a weapons platform."

With this added strength, weapons can be mounted directly to the uniform system. In the concept uniform (at right), the exoskeleton is the protruding composite material you see below the knee.

The exoskeleton will merge structure, power, control, actuation and biomechanics. Here's a look at some of the challenges that DARPA has outlined:

As warfare changes, armies are looking for any advantage they can get against potential enemies. The new Future Force Warrior suit will take human performance to unprecedented levels. Imagine a platoon of soldiers wearing suits that turn an ordinary person into a real, live superhero.

For more information on the Future Force Warrior and related topics, check out the links on the next page.