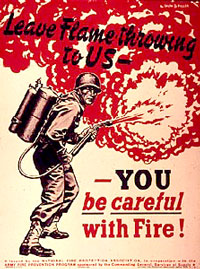 Fire is one of the most useful natural phenomena in the world. When early humans first captured fire from naturally burning areas, and later generated flames themselves, their lives changed dramatically. With this understanding of nature, they could have light and heat after nightfall, and they could cook their food.

But fire is also one of the most dangerous phenomena in the world, and this fact wasn't lost on early humans. Archeological evidence suggests early hunters used fire to flush out their prey, and some groups may have used it to fight other humans. Throughout history, fire has proven to be an extremely effective, devastating weapon.

One of the most interesting developments in fire weaponry was the flamethrower. The modern flamethrower came about in the early 20th century, but the original idea is actually thousands of years old. In this article, we'll look at these early pyrotechnic weapons, as well as their modern counterparts, to understand what they do and how they do it.

Early use of "Greek fire," as shown in a 10th century Byzantine manuscript

Fire is caused by a chemical reaction between two or more substances, typically oxygen in the air and some sort of fuel (gasoline, wood, or coal for example). This reaction is triggered by extreme heat, often caused by another flame or a spark. The fire's own heat is sufficient to keep the chemical reaction going as long as there is fuel to burn.

The basic idea of a flamethrower is to spread fire by launching burning fuel. The earliest flamethrowers, dating roughly from the 5th century B.C., were long tubes filled with burning solid material (such as sulfur or coal). These weapons worked in the same way as a blow-gun -- warriors just blew into one end of the tube, propelling the burning matter toward their enemies.

A more sophisticated sort of flamethrower came into widespread use in the 7th Century. In this era, the Byzantine Empire added "Greek fire" to its arsenal. Greek fire was probably a mixture of liquid petroleum, sulfur, quicklime and other elements. In any case, it was a highly-flammable, oil-based fluid.

In combat, Byzantine forces would pump this substance from a large reservoir, through narrow brass tubes. These tubes concentrated the pressurized liquid into a powerful stream, the same way a hose and nozzle concentrate water into a narrow jet. The soldiers lit a fuse at the end of the brass tubes to ignite the fluid stream as it shot out. The fluid stream carried fire dozens of feet through the air.

The Byzantines mounted these weapons along the walls of Constantinople, as well as the bows of their ships. Since the flammable substance was oil-based, it would still burn even when it hit the water, making it a particularly effective weapon in naval battles.

Initially, the Byzantines' enemies were mystified by this horrific weapon, but before long, others were copying the technology. The Chinese applied their advanced technology to take the idea to the next level. The Byzantines used a very basic pump, like the sort used to drive water out of an underground well. This kind of pump only pushes out fluid on the downstroke, so the Byzantine flamethrower could only shoot fire in short bursts. The Chinese had developed a more advanced pump, the double-acting bellows. Double-acting bellows consist of a pivoting pedal that drives two pumping chambers. When the pedal is pushing down on one chamber (the downstroke), it's lifting up on the other (the upstroke). In this way, the pump is constantly pushing out fluid, allowing a continuous stream of fuel (and therefore a constant blast of fire).

Soon after this sort of weaponry came into use, it was eclipsed by another pyrotechnic technology: gunpowder. Over the next thousand years, gunpowder revolutionized the world of warfare, and flamethrowers more or less fell by the wayside.

But as we'll see in the next section, flamethrowers were eventually reintroduced into the world's combat arsenal, in a modified form. 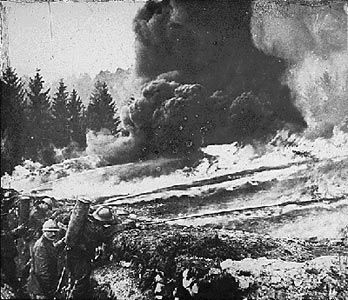 In World War I, the German army rediscovered the flamethrower and added it to their arsenal (in a new and improved form). By World War II, forces on both sides used a range of flamethrower weapons on the battlefield.

The most impressive innovation was the handheld flamethrower. This long, gun-type weapon has an attached fuel tank that soldiers can carry on their back.

A U.S. flamethrower operator in Vietnam during Operation New Castle -- the weight and size of the fuel tanks made the soldier extremely vulnerable to enemy fire, and troops had to be assigned to protect him.
Photo courtesy NARA 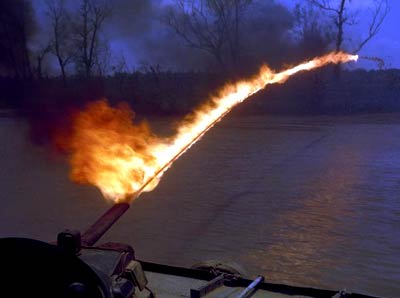 A U.S. Navy "Zippo" flamethrower is tested from a patrol boat. The unreliability of electronic ignition systems meant that operators sometimes had to use a Zippo lighter to ignite the fuel as it left the nozzle.
Photo courtesy U.S. Department of Defense

The diagram below shows how a typical handheld unit works.

The backpack contains three cylinder tanks. The two outside tanks hold a flammable, oil-based liquid fuel, similar to the material used to make Greek fire. The tanks have screw-on caps, so they can be refilled easily. The middle tank holds a flammable, compressed gas (such as butane). This tank feeds gas through a pressure regulator to two connected tubes.

The gun housing has a long rod running through it, with a valve plug on the end. A spring at the back of the gun pushes the rod forward, pressing the plug into a valve seat. This keeps the fuel from flowing out through the gun nozzle when the trigger lever is released. When the operator squeezes the trigger lever, it pulls the rod (and the attached plug) backward. With the valve open, the pressurized fuel can flow through the nozzle. A flamethrower like this one can shoot a fuel stream as far as 50 yards (46 meters).

As it exits the nozzle, the fuel flows past the ignition system. Over the years, there have been a variety of ignition systems used in flamethrowers. One of the simpler systems was a coil of high-resistance wire. When electrical current passed through these wires, they released a lot of heat, warming the fuel to the combustion point. The gun in the above diagram has a slightly more elaborate system. 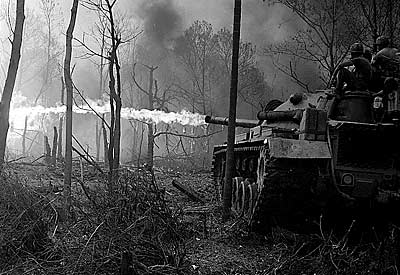 In World Wars I and II, as well as in the Vietnam war, flamethrower designs similar to the handheld models were mounted on tanks.

Typically, the fuel in these weapons was driven by rotary or piston pumps, powered directly by the tank engine. With greater pumping power, tank-mounted flamethrowers had better range, and with more fuel tank space, they had a larger ammunition supply. 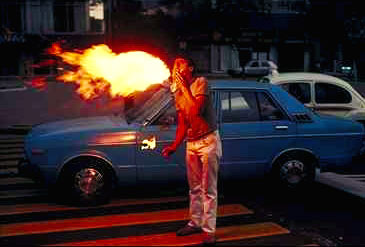 Military forces continue to use these sorts of weapons today, but the technology is more commonly used for nonviolent civilian purposes. Most notably, foresters use flamethrowers in prescribed burning, and farmers use it to clear fields. Some car enthusiasts install low-range flame throwers at the back of their cars, to release an impressive ball of fire when they take off. Rock stars and other entertainers often include flamethrowers as part of elaborate pyrotechnic displays.

One of the most widely known flamethrower technologies today is actually the simplest. "Fire breathers" turn their own bodies into flamethrowers by pouring fuel (typically kerosene) into their mouth and holding an ignition system (typically a torch) in front of them. When they spit out the kerosene, the torch ignites it, creating a dazzling stream of fire (only professionals should attempt this -- it is extremely dangerous). The technique is definitely low-tech, but the operating principle is exactly the same as in the most expensive military flamethrowers!

For more information on flamethrowers and related topics, check out the links on the next page.

Half the World's Gun-related Deaths Occur in Just 6 Countries, Including the U.S.
Douglas A-4 Skyhawk
McDonnell Douglas F-15 Eagle