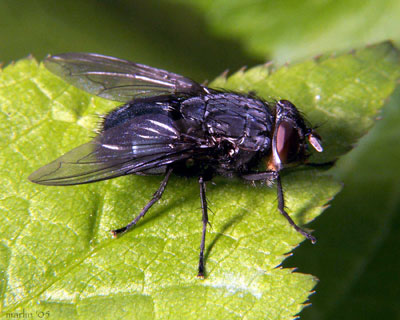 A large, adult blow fly, who must have received his fill of human remains.
Bruce Marlin

Many kinds of bugs will flock to a decomposing body, but the most common kinds of bugs found on a corpse are flies and beetles. Flies, particularly blow flies, can find dead flesh within minutes. Fly larvae, commonly known as maggots, do the majority of the eating and are responsible for much of a corpse's decay. Beetles, on the other hand, will typically move in once a corpse has dried out.

When collecting insects, investigators try to locate the largest specimens -- the oldest bugs should give the best PMI (postmortem interval). To preserve the insects, samples taken from the body are placed into containers filled with about 70 percent isopropyl alcohol, the same strength as the rubbing alcohol solution you can buy at the store. The containers are labeled with the date and time of the collection and the part of the body from which the insects were taken. Finally, the investigator either delivers the specimens directly to a specialist or mails the containers expressly for examination.

In a perfect situation, insects can prove an easy tool for uncovering the unknown. For instance, if a person dies of natural causes in a room where the temperature has remained constant and the coroner wants to know the time of death, the entomologist simply looks at the bugs around the corpse and reports the details.

It's almost never that easy, however. Investigators need to take into account a large number of variables when collecting specimens. The temperature of the surrounding area, for example, determines how quickly larvae will grow in a corpse. When a person is murdered during the summer months and left outside for several days, the ambient temperature surrounding the corpse can change dramatically. Certain types of blow flies develop faster during hot weather but development slows down when it's cooler. Bugs found on a body that's been outside for weeks or even months show drastic variations in growth cycles, and an entomologist needs to carefully observe the available specimens to determine a likely range.

­ For lots more information on how to catch the bad guys, see the next page.

Don't Forget to Wash Your Sickle!

Although many of the modern advancements in forensic science were made in the late 19th and early 20th centuries in Europe and the United Kingdom, records show that the Chinese understood a great deal about investigating strange deaths. In 1235 A.D., a book by Chinese death investigator Sung Tz'u called "The Washing Away of Wrongs" was written. In it is perhaps the first documented account of forensic entomology. Sung recounts a murder in a small Chinese village where the victim was badly cut. The local death investigator asked around, but after several questions and few answers, he decided to have each villager bring out his sickle and lay it out across the ground.

Eventually, flies swarmed over one sickle, most likely because its owner failed to wash away microscopic tissue from the blade. The killer confessed, and the first known case of forensic entomology was closed.