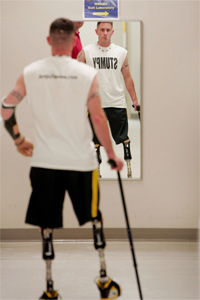 Aside from how it's made, an IED is like any other bomb -- it explodes. Before you can understand the impact of an IED, it helps to know what's happening during that fateful moment.

­So, an IED explosion causes damage to vehicles and property primarily through the blast wave, heat and fires.

In contrast, casualties within the blast radius can stem from many causes. The explosion can release shrapnel or create debris from secondary impacts such as flying glass from broken windows. This debris can penetrate the body in many places, leading to lacerations, bleeding, broken bones and loss of limbs. Second, the heat from the blast causes fires; both the heat and the fires themselves can cause severe burns. Finally, the pressure in a blast wave can be on the order of 1,000 times atmospheric pressure. This intense pressure can rupture your eardrums and slam your brain against the inside of your skull, which leads to concussion, blindness, deafness and swelling of the brain. In addition, many air-filled tissues and organs such as the lungs and bowels can be perforated by the pressure changes.

The type and extent of the injury depends on the person's location relative to the IED. A person in the primary blast radius can be hit by pressure changes, heat and shrapnel. Most likely, this person will die. Outside the primary blast radius, a person is most likely to be injured by shrapnel. The person may survive depending on how many injuries the shrapnel causes and where they're located. If shrapnel tears a hole in a major artery, then that person can bleed to death.

­Civilian casualties are often high in IED attacks because these people are unprotected. Initial injuries to U.S. soldiers from IED attacks were caused mainly by shrapnel. However, the use of Kevlar body armor and helmets has greatly reduced shrapnel injuries. While these types of injuries have fallen, military surgeons have reported increases in traumatic brain injuries caused by the blast effects [source: Okie].