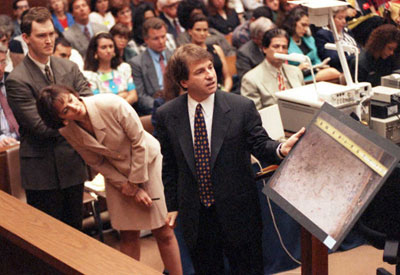 Defense attorney Barry Scheck shows the jury a picture of a second shoe imprint that he believes could be that of a second assailant during the O.J. Simpson murder trial in Los Angeles.
Pool/AFP/Getty Images

­­Although we're not conscious of it all the time, every movement we make -- whether it's on foot or in a vehicle -- leaves some kind of impression. For example, a criminal walking into a building to rob a bank and then screeching off in a getaway car can't avoid walking on the floor or leaving tire tread marks. A murderer would also have a hard time entering and exiting his victim's home without stepping on a rug or touching the ground outside.

Impression evidence happens when any object or material takes on the form of another object though direct physical contact. A judge or jury can consider any type of impression as evidence in a trial, and the practice works the same wa­y as fingerprinting: Once investigators collect evidence, impressions are used to find legitimate matches. There are three main types:

­When we walk into a room, we're usually not thinking about our footprints. Unless we're tracking in mud or rainwater and making a huge mess, it's nearly impossible to see the traces we leave with each step. But several things happen when our shoes touch the ground.

Perhaps most surprisingly, even clean, dry­ shoes can leave an impression on a hard surface by creating electrostatic charges. Simply sprinkling fingerprint dusting powder over recent footprints will attract the powder to the charge and create a visual image of the impression. Unfortunately, residual static charges don't last very long and can be easily upset, so forensic experts rely more on the deformation of surface areas. Shoe impressions on materials such as soil, sand or snow can produce a largely three-dimensional footprint. If you've ever driven a car through the mud, you've probably seen the clear scar the tires have left in the earth. Carpet or grass, however, will rebound and regain a flat surface more easily, and an impression on these types of surfaces will only last a short time. Still, stains and other residue will leave two-dimensional marks and create a recognizable image.

Tire marks work the same way as footprints, although tire marks are much easier to identify. Initially, a tire mark can tell an investigator the brand of tire a criminal used, but that only narrows things down slightly. Further inspection, however, can reveal more -- defects and wear on a tire tread caused by nails, gravel, patches and alignment problems can identify a unique set of tires.

Lastly, tool marks are created when a tool comes into contact with another object or surface and leaves a significant impression. Suspects typically use wire cutters, crowbars and screwdrivers to cut and pry their way into windows and doors. All of these tools leave distinctive marks that investigators can easily identify -- almost as if the tool itself were leaving a fingerprint at the crime scene.

­We know that criminals can leave these traces behind them after they commit a crime, but how easy is it to detect them? And how do experts record them for later analysis? To read about preserving impression evidence, pry open the next page.