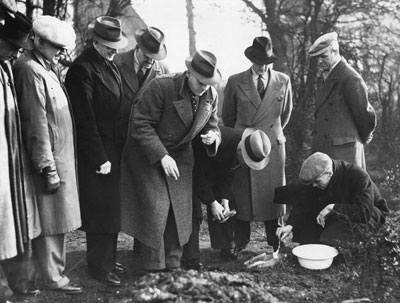 A policeman from Doncaster, England makes a plaster cast of footprints left by a housebreaker.
Fox Photos/Getty Images

When approaching a crime scene with the intention of recording impression evidence, the first thing forensic investigators are taught to do is to secure and preserve the area. Because impressions are easily disturbed and often overlooked, a scene filled with too many people walking around could quickly become worthless to someone looking for footprints.

Once a perimeter is secure, investigators walk inward, looking for impressions and reconstructing the events of the crime to the best of their knowledge. They try to determine important facts such as the direction of travel or the number of suspects at the scene. Special lighting techniques can uncover hidden impressions, including the use of oblique lighting. By shining a light source diagonally at the ground, not vertically, the ridges of an impression create shadows which alert investigators to disturbed and uneven surfaces. Photographs of discovered impressions are also taken for visual documentation.

Hammond, Ind. police officers make a mold of a tire track near the scene of a reported sniper shooting.
Scott Olson/Getty Images

Although impression evidence is extremely fragile, if left undisturbed it can remain for long periods of time. As long as a crime scene area isn't harmed by weather (mainly wind, rain and snow) or disturbance from other shoes, tires or tools, there are two major techniques experts use to gather impression evidence:

As available equipment and techniques for forensic science improve, many in the field are r­ealizing the importance of impression evidence. Although easy to ov­erlook and difficult to locate, footprints and other impression evidence left at the scene of a crime are typically even more prevalent than fingerprints, and they can provide important clues to mysterious cases. To learn more about the shadowy world of criminal investigation, step lightly to the next page.