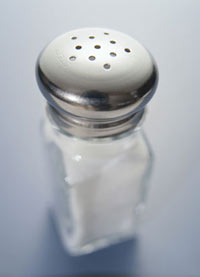 The different varieties of salt available for cooking can be dizzying, but all of them fall into four basic types: table salt, sea salt, kosher salt and rock salt. The first three types are food-grade salt and are required by the FDA to contain at least 97.5 percent sodium chloride. The other 2.5 percent is trace minerals, chemicals from processing or anti-caking agents.

Table salt is either iodized or noniodized. Iodine was first added to salt in the mid-1920s to combat an epidemic of hyperthyroidism, an enlargement of the thyroid gland caused by hormonal irregularities due to lack of iodine. Children without sufficient iodine intake can also experience stunted physical and mental growth. Few people suffer from iodine deficiency in North America, although it is still a problem around the world. In some areas, fluoride and folic acid are also common salt additives.

Table salt is the most commonly used salt. It is processed to remove impurities and contains nonclumping agents like calcium phosphate. Because it has a fine texture, table salt is easy to measure and mixes evenly.

Sea salt is generally more expensive than table salt because of how it's harvested. "Fleur de sel" (French for "flower of salt"), for example, is scraped by hand from the surface of evaporation ponds. Some sea salts are not as heavily processed as table salt, so they retain trace minerals that are usually removed in the refining process. Sea salt can be coarse, fine or flaky. It can be white, pink, black, gray or a combination of colors, depending on where it comes from and which minerals it contains.

Some pink salts, such as the salt harvested in the Himalayas, get their color from calcium, magnesium, potassium, copper and iron, Others contain carotene from salt-tolerant algae and are more peach-colored. Reddish-pink salts, such as Hawaiian alaea salt, have iron oxide added in the form of volcanic clay.

Black salt is often really more of a dark pinkish-gray color. One Indian variety contains sulfurous compounds, iron and other trace minerals and has a strong, sulfuric taste. Hawaiian black lava salt is darker and contains traces of charcoal and lava.

The color of gray salt comes from trace minerals or from the clay where it is harvested, such as the damp, unrefined "sel gris" harvested on the coast of France. Smoked salt is also grayish and is a fairly new offering among the gourmet varieties of salt. It is smoked over wood fires and gives a smoky flavor to dishes seasoned with it.

Some gourmands argue that the higher amounts of trace minerals can give sea salts a unique, earthy flavor. Others say that the taste is about the same but that their different colors and textures can add a lot to presentation. In general, sea salts are used to top or "finish" a dish rather than during cooking.

On the next page we'll learn about kosher and rock salts.­