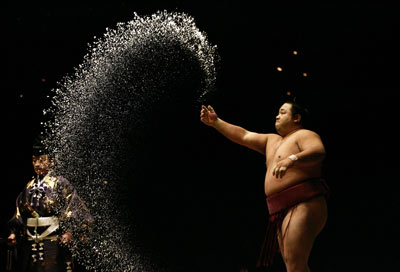 Prior to industrialization, it was extremely expensive and labor-intensive to harvest the mass quantities of salt necessary for food preservation and seasoning. This made salt an extremely valuable commodity. Entire economies were based on salt production and trade.

In the Iron Age, the British evaporated salt by boiling seawater or brine from salt spri­ngs in small clay pots over open fires. Roman salt-making entailed boiling the seawater in large lead-lined pans. Salt was used as currency in ancient Rome, and the roots of the words "soldier" and "salary" can be traced to Latin words related to giving or receiving salt. During the Middle Ages, salt was transported along roads built especially for that purpose. One of the most famous of these roads is the Old Salt Route in Northern Germany, which ran from the salt mines to shipping ports.

Salt taxes and monopolies have led to wars and protests everywhere from China to parts of Africa. Anger over the salt tax was one of the causes of the French Revolution. In colonial India, only the British government could produce and profit from the salt production conducted by Indians living on the coast. Gandhi chose to protest this monopoly in March 1930 and marched for 23 days with his followers. When he arrived on the coast, Gandhi violated the law by boiling a chunk of salty mud. This march became known as the Salt March to Dandi, or the Salt Satyagraha. People across India began making their own salt in protest, and the march became an important milestone in the struggle for Indian independence.

Salt production also played a significant role in early America. The Massachusetts Bay Colony held the first patent to produce salt in the colonies and continued to produce it for the next 200 years. The Erie Canal was opened primarily to make salt transportation easier, and during the Civil War, the Union captured significant Confederate saltworks and created a temporary salt shortage in the Confederate states. It continues to be important to the economies of many states, including Ohio, Louisiana and Texas].

Aside from economics, salt also has cultural and religious significance. It has long been used in Shintoism to purify things, and Buddhists use salt to repel evil. In Judeo-Christian traditions, salt was used to purify people and objects, as an offering, and to seal covenants. There are numerous references to salt in the Old and New Testaments of the Bible. One of the most famous is Lot's wife, who was turned into a pillar of salt in Genesis after disobeying God's command. A rock-salt pillar that stands today on Mount Sodom is known as "Lot's Wife."

There are lots of sayings related to the use of salt. It was often traded for slaves, which is the origin of the expression "not worth his salt." Someone who is the "salt of the earth" is a dependable, unpretentious person. "Salting the earth," on the other hand, refers to an ancient military practice of plowing fields with salt so that no crops could be grown.

For lots more information on salt, check out the links below.