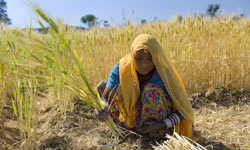 Barley crop being harvested in India. How can we increase our food supply as our arable land decreases?
Tim Graham/The Image Bank/Getty Images

In the next 40 years, the world population is expected to explode from 7 billion to more than 9 billion people [source: Negative Population Growth]. More people means more hungry bellies, and if we're going to feed the growing world population, we need to increase the world's food supply.

So, if the population is "only" increasing by about 28 percent, why do we want to double the food supply? Don't forget that hundreds of millions of people worldwide go hungry every day. We're actually producing enough to feed the world, right now, but the hunger problem is there because the people who need it most can't afford to purchase food or don't have enough land to grow what they need [source: Hunger Notes]. We have to not only produce more food as our population increases, but also make sure that the people who need it have access - and can afford - the food we're producing. In fact, the United Nations is calling for a 70 percent increase in food production by 2050.

Food produced doesn't equal food on the plate, and the extra production allows for food that spoils in transit, rots in the field, and for failed crops due to extreme weather.

No single idea is going to fix the world hunger problem, but there are some farming methods, changes to the food system, and even consumer actions that can make a difference.