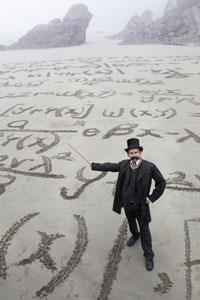 It's easy to think of mathematics as a kind of storybook sorcery -- a powerful secret language known to few, mastered by inhuman agents (such as your calculator) and underpinning the very fabric of the universe. Even if we avoid such hyperbole, the fact remains: Many of us are mathematically illiterate in a world that runs on math.

When was the last time you seriously crunched some numbers with only pen and paper? In his book "The Geometry of Paradise," Mark A. Peterson described the people of medieval Europe as a nonmathematical culture in possession of sophisticated mathematics. Mathematicians of the day certainly honed their skills but mostly out of love for mathematical abstractions. They perused few practical applications with it and, according to Peterson, didn't really grasp what math was.

Today, the mathematics field is far more vibrant than it was in the Middle Ages, but it still eludes an alarming number of those who depend on it. On one hand, math certainly has a way of solving itself these days through calculators and hastily keyed-in Google searches. Yet for many individuals, mathematical anxiety begins with inadequate teaching from nonmathematicians who have trouble relaying enthusiasm and practicality. Factor in overcrowded classes, and it's little wonder that so many students fail to latch onto math's logical core. In fact, only 40 percent of 4th graders and 34 percent of 8th graders in the U.S. are proficient in math, according to Arne Duncan, U.S. education secretary speaking at the National Council of Teachers of Mathematics in April 2011.

The ramifications of mathematical illiteracy are very real. In 2005, the United States National Academies identified the country's decline in mathematics education as having a severe detrimental effect on its scientific, technological and economic prowess [source: Mullich].

So let's demystify the world of mathematics. A world without math is unimaginable. It's a part of who we are. It's the analytical juice of our left brain and, in the words of physicist Richard Feynman, even a fool can use it. Here's a quote from the late great scientist's book "The Pleasure of Finding Things Out":

What we've been able to work out about nature may look abstract and threatening to someone who hasn't studied it, but it was fools who did it, and in the next generation, all the fools will understand it. There's a tendency to pomposity in all this, to make it deep and profound.

In this article, we'll take a very wide-angle look at the world of numbers. Just what are they, and what does math really do?