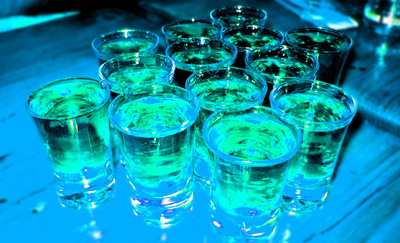 Can we enjoy alcohol without the negative side effects?

Alcohol is a big part of our culture. But for all of its enjoyable aspects, drinking can take a toll on the body. What if we could enjoy all of the pleasurable effects of alcohol without having to worry about the harmful side effects? On the TV show "Star Trek: The Next Generation," the characters enjoy all the buzz of drinking alcohol without the nasty hangovers and other negative effects, thanks to a fictional creation called "synthehol." A similar alcohol alternative could soon become a reality.

To understand how synthehol could work, let's look briefly at how intoxication works. The ethanol (ethyl alcohol) in alcoholic drinks causes the "buzz" as well as the hangovers and other health problems. Ethanol is a form of alcohol produced by the fermentation process, in which yeast breaks down sugars in the absence of oxygen. Ethanol interferes with the transmission of nerve cells in the brain. In part, it enhances the effect of a neurotransmitter called GABA (gamma amino butyric acid). GABA acts as an inhibitory neurotransmitter on the central nervous system. It has a sedative effect and causes sleepiness.

Ethanol is a GABA-A agonist. This means that when ethanol attaches to signaling molecules known as GABA-A receptors, it causes the release of GABA-A. There are several different subtypes of GABA-A receptors, each of which triggers a different reaction to alcohol, from the sedative effect to memory loss to nausea.

Ethanol also acts as an antagonist at the NMDA receptor. NMDA is a receptor for glutamaine, a neurotransmitter responsible for passing messages from one nerve cell to another. Ethanol blocks its action. When the NMDA receptor is activated, it enhances stimulation of the nervous system. But when the receptor is blocked by an antagonist, it suppresses the nervous system response and enhances the sedative effect of alcohol.

Many of the positive effects that people feel when drinking alcohol are related to how it affects the cerebral cortex -- the highest portion of your brain. There alcohol depresses the behavioral inhibitory centers. In other words, when we drink, we often become more social and confident. Alcohol also raises the level of the chemical dopamine in the brain's reward center, which creates that "buzzed" feeling. These effects get more pronounced as the blood alcohol level (BAC) increases. To learn more about how alcohol affects the brain, check out How Alcohol Works.On the next page, learn about several methods that may remove alcohol's harmful effects.­