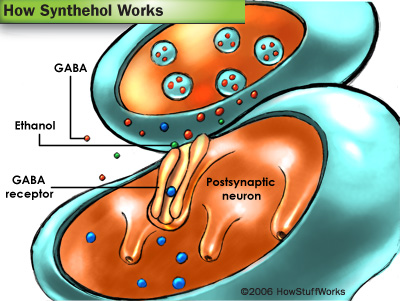 ­ Recent re­search has inc­reased scientists' understanding of the GABA receptors. But although there have been some studies done on partial GABA-A receptor agonists, there hasn't been enough evidence to show that they are free of the side effects of full agonists such as the benzodiazepine Diazepam, or Valium.

David Nutt and some other researchers believe an alcohol alternative is possible. Nutt says those tested so far have been relatively safe. They have shown little sedation, and few signs of dependence or withdrawal symptoms. Also, they don't tend to interact with the real thing, so even if someone drinks a few beers after having one of these alternatives, there is little risk of a dangerous interaction.

Finding an alcohol alternative and putting it on the market won't be easy, though. Researchers will probably need to use different compounds that work on all of GABA-A receptors to remove all of the negative effects of alcohol. Some researchers wonder if drug companies will invest money to research and develop a product not designed to treat a disease. They may not be interested in helping an alcohol alternative pass the Food & Drug Administration's safety testing requirements.

Researchers will also have to find the best way to deliver the alcohol alternative. Part of the enjoyment of drinking alcoholic drinks is in the taste and feel of sipping on them. An alternative might have to be a liquid to satisfy drinkers - a pill version probably won't gain acceptance. Also, it may need to come in different strengths, just like alcoholic drinks, to compare with, say drinking a glass of wine versus drinking a vodka martini. And, it would probably need to be absorbed and enter the brain in a similar way to alcohol, to help steady drinkers easily make the switch.

To find out more about synthehol and other alcohol alternatives, check out our links page.