How do erasers erase? 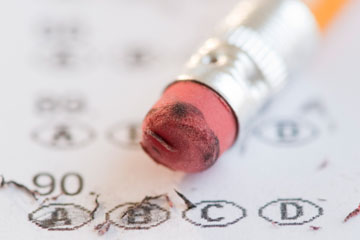 Erasers have come a long way since the early days of using moist bread to eradicate errors.
© Jamie Grill/Tetra Images/Corbis

You probably don't think about pencils and erasers much in today's world of digital and mobile access to everything; while it's undeniable that the No. 2 pencil and the SAT have a long history together, pencils don't really come up much outside of standardized testing anymore. But despite our devotion to our devices, Americans still use more than 2 billion pencils every year [source: Lunsford].

Contrary to popular belief, pencils aren't really made with lead, and haven't been since Roman scribes wrote on papyrus -- that's a common pencil myth. So if you chew on your pencils, rest assured you won't become ill from lead poisoning (although that's not a free pass to snack on a No. 2). Today's pencils are made with graphite, water and clay (which is used as a binder), and pencil lead has been made this way since Nicolas-Jacques Conté invented the mixture in 1795 [source: Ritter]. They weren't topped with an eraser tip, though, until about a century later. And it's this companion to the pencil, the eraser, that we're interested in here.

Erasers eradicate pencil markings by lifting graphite from the paper you've written on. As you write, particles of graphite from your pencil mingle with and cling to particles in the fiber of the paper. Here's the science: Modern erasers are almost always made from petroleum-based synthetic rubber compounds, typically polyvinyl chloride (they're no longer made from natural latex rubber, which is an allergen for some people). Because the particles in the polymer that make up an eraser are stickier than paper, those graphite particles get stuck to the eraser instead. Some erasers are stickier than others and absorb graphite particles more easily, giving you a cleaner, less-abrasive result.

Believe it or not, one of the very first erasers used was moist bread. Let's talk about how far erasers have come since the days of day-old bread, next.

Use erasers to remove graphite, ink ... and scuff marks?

You can expect to write about 45,000 words with a single pencil, and along the way there are sure to be a few mistakes. And with mistakes come erasers -- and some erase better than others.

Pencil erasers (also called plug erasers), for example, and those standard-issue pink school erasers are basically the same type of eraser -- while they get the job done, they're considered some of the worst offenders when it comes to smudging, leaving behind eraser debris, and tearing or wearing a hole in the paper. As you rub the eraser against the paper, the eraser begins to disintegrate -- some of this will help remove the graphite and some you'll need to brush or blow away, but this hard rubber may require you to rub vigorously to get your desired result. Softer rubber erasers require less force and friction, making them less abrasive to paper. White vinyl erasers, for example, erase more cleanly than the common pink eraser because they are made of softer vinyl. Kneaded erasers are moldable and soften when you knead them in your hands. They're one of the least abrasive erasing tools for removing graphite, charcoal and lead, and because this type of eraser is sticky enough to absorb graphite particles without friction, they leave no smudges, debris or tears.

Erasers can do more than erase your unwanted pencil doodles, though. Remember erasable-ink pens? Erasable inks may not be as popular today as they were in the 1980s, but if you're looking for an erasable ink product, they're still out there. Erasable inks contain liquid rubber cement, which means that unlike traditional inks, these will stick to an eraser if you erase them within 10 hours of writing (otherwise the rubber hardens and can no longer be lifted from the paper). Products like magic erasers can take marks off of a number of surfaces, but give your standard pink pencil eraser a try on some of those scuffs. You might be surprised at how effective it can be at erasing more than just pencil marks.

About 75 percent of the pencils sold in America are painted yellow [source: Ritter].

Author's Note: How do erasers erase?

I learned something new about pencils while researching this article. No, not that pencil lead isn't lead (I knew that fact already); rather I learned about the pencil sandwich -- the industry term used to describe how pencil wood is placed around the graphite insert. I did, however, also learn that there's a reason I prefer a soft, kneaded eraser over erasers of any other flavor: It actually does the job you expect an eraser to do.