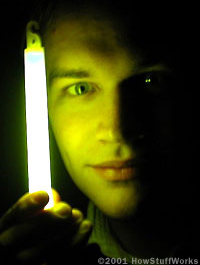 Since their invention 25 years ago, light sticks have become a Halloween staple. They're perfect as safety lights because they're portable, cheap and they emit a ghostly glow. Light sticks are also extremely popular on the rave scene (as are light necklaces, light glasses and light rope), and they make an ideal lamp for SCUBA divers and campers.

While it may seem like supernatural magic, the technology behind light sticks is actually very simple. In this article, we'll look inside a light stick to find out how it gives off such a strong light with no bulb and no battery.

Light is a form of energy, which can be emitted through a variety of processes. These processes include:

All these processes work on the same basic principle: An outside source of energy excites atoms, causing them to release particles of light called photons. When you burn something, for example, heat energy causes the atoms that make up the material to speed up. When the atoms speed up, they collide with each other with greater force. If the atoms are excited enough, the collisions will transfer energy to some of the atom's electrons. When this happens, an electron will be temporarily boosted to a higher energy level (farther away from the atom's nucleus). When it eventually falls back down to its original level (closer to the nucleus), it releases some of its energy in the form of light photons. (See How Atoms Work and How Light Works for more information.)

A light stick does the same basic thing, but it uses a chemical reaction to excite the atoms in a material. We'll look at this reaction in the next section. ­ 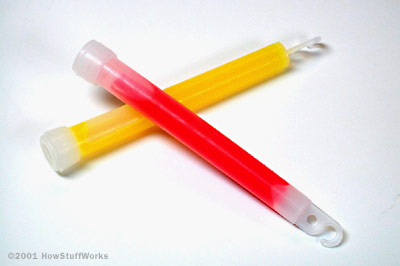 Light sticks come in a variety of colors. The color of the light is determined by the chemical make-up of the fluorescent dye in the stick.

Compounds are substances made up of atoms of different elements, bonded together in rigid structure. When you combine two or more compounds, the various atoms may rearrange themselves to form new compounds. Depending on the nature of the compounds, this reaction will cause either a release of energy or an absorption of energy.

The reaction between the different compounds in a light stick causes a substantial release of energy. Just as in an incandescent light bulb, atoms in the materials are excited, causing electrons to rise to a higher energy level and then return to their normal levels. When the electrons return to their normal levels, they release energy as light. This process is called chemiluminesence.

The chemical reaction in a light stick usually involves several different steps. A typical commercial light stick holds a hydrogen peroxide solution and a solution containing a phenyl oxalate ester and a fluorescent dye. Here's the sequence of events when the two solutions are combined:

The light stick itself is just a housing for the two solutions involved in the reaction -- essentially, it is portable chemistry experiment. Next we'll see how bending the light stick sets this experiment in motion.

We just saw that a light stick is a housing for two chemical solutions, which give off light when they are combined. Before you activate the light stick, the two solutions are kept in separate chambers. The phenyl oxalate ester and dye solution fills most of the plastic stick itself. The hydrogen peroxide solution, called the activator, is contained in a small, fragile glass vial in the middle of the stick.

When you bend the plastic stick, the glass vial snaps open, and the two solutions flow together. The chemicals immediately react to one another, and the atoms begin emitting light. The particular dye used in the chemical solution gives the light a distinctive color.

Depending on which compounds are used, the chemical reaction may go on for a few minutes or for many hours. If you heat the solutions, the extra energy will accelerate the reaction, and the stick will glow brighter, but for a shorter amount of time. If you cool the light stick, the reaction will slow down, and the light will dim. If you want to preserve your light stick for the next day, put it in the freezer -- it won't stop the process, but it will drag out the reaction considerably.

Light sticks are just one application of an important natural phenomenon -- luminescence. Generally speaking, luminescence is any emission of light that is not caused by heating. Among other things, luminescence is used in televisions, neon lights and glow-in-the-dark stickers. It's also the principle that lights up a firefly and makes some rocks glow after dark.

To find out more about light sticks, luminescence and related topics, check out the links on the next page.