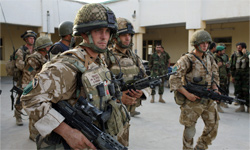 No mind control for these U.S. soldiers on patrol -- yet.
Marco di Lauro/Getty Images

The helmet used by the U.S. military has changed dramatically over the years. In World War I, the M1917/M1917A1 helmets, also known as "Doughboy" or "dishpan" helmets, protected the heads of American infantrymen. They were replaced in 1941 by the M-1 "steel pot," the standard-issue helmet in World War II, the Korean conflict and throughout the Vietnam War. By the 1980s, U.S. military helmets had evolved into a one-piece structure composed of multiple layers of Kevlar 29 ballistic fiber.

The helmet of the near future, however, may contain something more than extra protection from flying shrapnel. An Arizona State University researcher, working under a grant from the U.S. Defense Advanced Research Projects Agency (DARPA), is trying to develop a military helmet equipped with technology to regulate soldiers' brains. The technology is transcranial pulsed ultrasound, which delivers high-frequency sound waves to specific regions of the brain. Under the influence of these sound waves, neurons send impulses to their targets, exerting control over them. On the battlefield, this has enormous implications. Using a controller, a soldier could release ultrasound pulses to stimulate different areas of the brain. For example, he or she might want to be more alert after being awake for many hours or relax when it's time to catch some shuteye. The soldier might even be able to relieve stress or become oblivious to pain, eliminating the need for morphine and other narcotics.

Of course, some people think this type of neurotechnology is pure science fiction. Others worry that Uncle Sam is trying to take over the minds of its soldiers. After all, it's one thing to have a drill sergeant yelling in your ear. It's another thing completely to have one inside your head [source: Dillow].