Robot That Devours Insects and Rodents 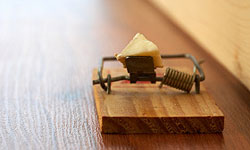 At this point, robotic vacuum sweepers, singing androids and mechanical dogs are old hat. But British inventors Jimmy Loizeau and James Auger have made a quantum leap with the Carnivorous Domestic Entertainment Robot, an automaton that would stalk and devour mice and insects, and then eat them and digest their bodies to produce its own power.

They've come up with five different concepts, including the mousetrap coffee table robot, which is designed to lure unwary vermin onto its surface, which contains a trap door triggered by motion sensors. Rodent victims trapped by the device would be chemically dismantled and fed to a microbial fuel cell. A light on the side of the device would inform the owner of how much energy is being produced by the auto-extermination. Other configurations include the Lampshade Robot, which would lure flies and moths to their doom, a Cobweb Robot that would trick spiders into weaving webs and then extract and feed them into its fuel cell, and the Flypaper Robotic Clock [source: Scott].

Right now these robots are still just concepts, which you might say is good thing: Realistically, who wants to watch their coffee table devour a mouse?