by Sara Novak
Prev NEXT
2 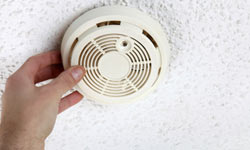 The next time you cook at a high temperature, you can thank NASA for helping fine-tune smoke detectors to prevent annoying false alarms.
iStockphoto/Thinkstock

While NASA didn't actually invent the first smoke detector, it did come up with a more modern version of the invention after partnering with Honeywell Corporation in the 1970s [source: NASA]. Equipped with a self-recharging nickel cadmium battery, the Honeywell AC/battery backup smoke and fire detector was the most sophisticated alarm system ever invented [source: NASA Tech].

Non-nuisance smoke alarms protect us from the dangers of fire damage and smoke without continuous false alarms. We can cook foods at high temperatures without enduring the persistent beeping of an oversensitive alarm.

America's first space station, Skylab, prevented noxious gases from harming the crew using the invention. The new smoke detector had adjustable sensitivity so that the crew would be safe without unnecessary interruptions. And today, you likely guard your attic against fire dangers with a more modern version of this safety device. (For more details on smoke detectors, read How Smoke Detectors Work.)

What modern invention protects the space crew from extreme temperatures? Find out on the next page.