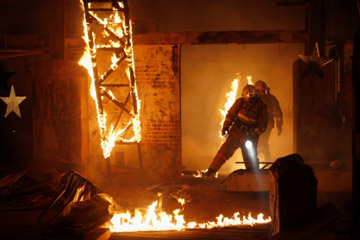 You probably think of the National Aeronautics and Space Administration (NASA) as that government agency that feeds us a regular diet of mind-blowing pictures of distant nebulae, Martian landscapes and weird moons. What you may not know is that NASA's technology and expertise also helps firefighters protect your house and your family's lives every day.

It's not hard to see what astronauts and firefighters have in common. Space is an extreme and hostile environment. With high temperatures on surfaces exposed to sunlight and extreme cold in the shadows, the nature of astronaut work means that NASA has an acute interest in materials that can withstand such environments.

In the 1950s, Dr. Carl Marvel developed a temperature-resistant artificial fabric for the U.S. Air Force called polybenzimidazole (PBI). PBI is an artificial fabric capable of remaining stable even in extreme heat and cold. In 1963, NASA recognized the usefulness of this material for its astronauts and joined forces with the U.S. Air Force, DuPont and Hoechst Celanese for further research and development [source: Olabisi, NASA Spinoff].

In recognition of how this ongoing research could help firefighters, the International Association of Fire Fighters (IAFF) in 1971 collaborated with NASA in Project FIRES (Firefighter Integrated Response Equipment System), a coordinated effort to leverage PBI and other technology developed for astronauts. This partnership led to better protective suit fabrics and international standards that help firefighters stay as safe as possible while in harm's way. These standards later became codified in the National Fire Protection Association's official standards for Personal Protective Equipment (PPE), and they continue to help protect firefighters by ensuring that the suits they wear when fighting fires conform to tough specifications [source: IAFF].

NASA's contribution to safety didn't stop with the fabric, though. The same PBI technology also goes into making better insulation and more heat-resistant construction materials and techniques. This means burning buildings protected with that material don't collapse as quickly onto firefighters working to put out the fire [source: NASA Spinoff].

But heat-resistant fabric and construction barely scratches the surface. On the next page, we'll look at how NASA worked with firefighters to rethink the entire firefighter suit and come up with a revolutionary new design.

In the late 1990s, the Houston Fire Department took a trip down to the local NASA office to see what they could do to help them develop a better helmet, which hadn't changed much since the 1800s. The discussion began, and soon a partnership developed that had them rethinking the entire suit. In 2000, NASA unveiled this new firefighter suit, developed with the Houston Fire Department, the Department of Defense and Lockheed Martin [source: Petty]. Its features are pretty amazing, but the changes made so much sense that it makes you wonder why they didn't do this earlier. The Houston Fire Department laid out the objectives for the suit, and NASA and its partners made it a reality.

While PBI helps keep the fire's heat away from your body, this suit has an active cooling feature that circulates liquids inside. That one improvement raised the maximum temperature the suits could be exposed to from 300 F (149 C) to 500 F (260 C) [source: Petty]. This is a huge difference when you consider that more firefighters die each year from their bodies overheating than from smoke or even the fire itself [source: Foley]. This active cooling also keeps the temperature of the firefighter's oxygen supply low, reducing the risk of a deadly explosion.

Burning buildings tend to fall apart, causing lots of falling debris and collapsing structure. The suit's improved impact resistance means this debris, while still dangerous, poses less of a danger than it did before [source: Foley].

Previously, firefighters often had to fight blazes blind because of all the smoke and steam. Infrared vision inside the helmet gives them the ability to work far more efficiently by attacking the hottest spots without running into them and finding victims more quickly. The faster they can do their job, the less time they have to spend in the burning building and the more lives are saved [source: Petty].

Making buildings stronger and keeping firefighters protected from heat, smoke and falling debris so they can work more safely and efficiently is one thing (a really cool thing). But read on to see how NASA is reconfiguring high-tech weaponry to use against forest fires. 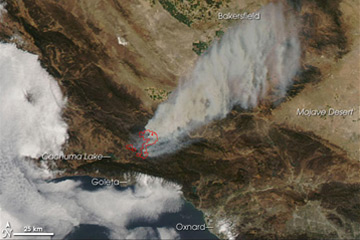