Browse the article What NASA technology helps keep you warm? 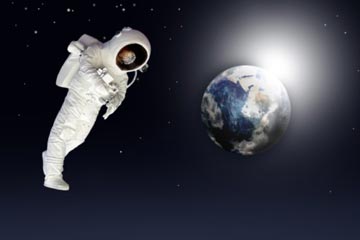 Outer space can be very cold or very hot -- or both. Solar radiation is intense, but objects in the dark lose heat quickly. The temperature can vary by 275 degrees Fahrenheit (135 degrees Celsius) from one side of an object to the other [source: NASA Temperature]. As a result, scientists at the National Aeronautics and Space Administration (NASA) have had to come up with ways to warm, cool and insulate people and equipment.

The law requires NASA to promote the technologies it invents and develops for commercial use. Over the years, more than 1,300 NASA spinoffs have gone into commercial products. NASA engineers' efforts to tame the temperature extremes of space have created technologies that help keep us warm right here on earth.

The space blanket is probably the best-known NASA spinoff for keeping you warm. It was originally designed to protect against temperatures extremes in space and used on almost all manned and unmanned NASA missions.

To create the material that goes into a space blanket, NASA researchers deposited vaporized aluminum onto plastic. The result was a very thin but durable sheet of material that was very good at reflecting the infrared waves that created heat. The material could either reflect and preserve body heat or ward off the intense radiation of the sun [source: NASA Scientific Reflecting].

Space blankets were used as insulation in the suits that astronauts wore when walking on the moon. They also serve as a radiation barrier for instruments, protecting them from extreme temperatures. On earth, space blankets are available to hikers who need to preserve body heat. Spectators watching a football game in January also use them to keep warm in the stands.

An important use of space blankets is in medical emergencies like auto accidents. They are a light, convenient way to keep a victim from losing heat and suffering the effects of a low body temperature.

The Heatsheet is a variation of the space blanket. If you've ever seen the finish of a marathon race, you'll see a herd of runners wrapped in these lightweight heat reflectors. Heatsheets come individually or on perforated rolls. They provide passive warming until the runner reaches his or her clothes. In hospitals, the sheets are used to keep patients warm after an operation.

The material used in space blankets and Heatsheets is also available in the form of emergency shelters. A sleeping bag that weighs only 2.5 ounces (70.8 grams) can reflect 90 percent of body heat; it can save the life of a person who has to spend the night in a cold environment [source: NASA Scientific Reflecting].

NASA technology has led to other innovations in temperature control. We'll talk about some of them in the next section.

Spacesuits designed by NASA for Apollo astronauts used heating elements to protect astronauts from extreme cold. Some of this same technology has been incorporated into a heated vest marketed by the Australian company Jett. It includes rechargeable lithium polymer batteries and flexible heating coils. The garment can keep you toasty at very cold temperatures [source: Jett].

Similar technology has been applied to heated gloves and boots. They include an open mesh fabric with heating elements that use chemically etched foil circuits. The heater circuit is similar to one used in the Apollo command module [source: Ruzic].

A Thermos vacuum bottle keeps your coffee hot for hours. Imagine millions of microscopic vacuum containers applied to a building. NASA scientists developed ceramic microspheres as insulators. Each tiny ball contains a vacuum. These durable ceramic cenospheres, can be mixed with paint. When they coat the inside walls of a house, they keep heat from escaping. Painted on outside walls, they ward off heat, keeping a structure cooler in summer. The paints have been used to insulate mobile homes and recreational vehicles [source: Intermodal].

Another high-tech insulator incorporates microencapsulated phase-change materials. These are also microscopic balls, but they're filled with chemicals that change phase -- that is, go from solid to liquid and back -- depending on temperature. NASA researchers developed them for use in astronaut glove liners. When a person's body temperature rises, the material absorbs the heat. When it drops, the material gives off the heat, providing warmth [source: NASA Scientific Covered].

The capsules are small enough that they can be built into the fibers of so-called "smart" clothing. Used in socks, gloves or hats, the fabrics not only insulate, they actually respond to the person's body, supplying or absorbing heat when it's needed. The fabrics are also useful in mattress pads, where they buffer normal temperature swings, helping a person to sleep more soundly.

Another high-tech warming material developed by NASA is aerogel. This extremely low-density silicon-based foam is great at stopping heat transfer. The space agency is using it to collect dust from comets. On earth it's been built into race cars for heat insulation. It may also be used to make better refrigerators with much thinner walls and more room inside for food. It could one day become a super-efficient home insulation [sources: NASA Facts, NASA Catching].

These are just some of the ways that overcoming the temperature extremes of space has paid off. Read on for more information about NASA warmth technology.

NASA Technology That Keeps You Cool

Astronauts can build up too much heat working inside spacesuits. NASA scientists developed a fabric mesh clothing with imbedded tubes for water circulation to draw off this heat. The technology was adapted for race car drivers and firefighters, who also need a way to cool off when operating inside a protective suit. It's also a boon to persons with multiple sclerosis and some other ailments, who can't cool off by sweating [source: O'Rangers].