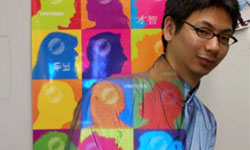 His retro-reflective garment acts like an invisibility cloak.
Photo courtesy Tachi Laboratory, the University of Tokyo

Nighttime driving has always presented problems. First came acetylene headlamps in the 1880s and then, by the turn of the century, electric headlights. High and low beams became available in 1917. These innovations certainly made driving at night easier, but there was still a problem: Even with headlights, drivers couldn't easily see pavement markings. In 1935, U.K. inventor Percy Shaw came to the rescue when he introduced cat's eyes, raised pavement markers that shone brightly at night. Each marker contained two glass spheres with mirror-coated back walls. When light rays from a driver's car entered the spheres, they bent and then bounced back toward the driver, following the exact same path.

This process is known as retro-reflection, and traffic signs, bicycle reflectors and high-visibility safety clothing all take advantage of it to improve the experience of night driving. But there are other interesting applications of retro-reflection. In the mid-2000s, scientists at the University of Tokyo invented something called optical camouflage, which relies heavily on a garment made from retro-reflective material. If you were to wear a garment made with this material, you could appear invisible to a viewer standing in front of you by filming an image of what's behind you and projecting it onto the garment. It takes some other fancy equipment, which you can read about in How Invisibility Cloaks Work, but the retro-reflective garment used in optical camouflage is, in essence, an invisibility cloak -- a la Harry Potter.