How could you confuse a rubber hand for your own hand? 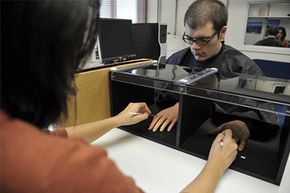 A 2011 study led by Vanderbilt professor Sohee Park studied the rubber hand illusion in the context of schizophrenia, unexpectedly triggering an out-of-body experience in the lab.
Photo courtesy of Vanderbilt University

Stroke patients have been known to disown body parts, not recognizing, say, their right arm as their own [source: Science Daily]. Schizophrenics, too, can experience blips in "body ownership," and evidence also points to this phenomenon playing a role in out-of-body experiences [source: Thakkar].

Body ownership is a term used to describe the sense of our physical selves as being ours, distinct from our surroundings. It contributes to humans' knowledge that the hammer we see and feel in our hands is not a part of our bodies, and, in lower-order animals, that this leg belongs to me, so I shouldn't eat it.

And so it seems our minds can be tricked not only into disowning parts of our bodies, but also into owning parts that don't actually belong to us -- in this case, a rubber hand. Scientists have been studying the illusion for years to learn about brain-body connections. In 2004, researchers pinpointed the premotor cortex as guiding the misperception [source: Science Daily]. In 2008, it was shown the temperature of the hidden hand actually drops during the illusion [source: Keim]. A rubber-hand experiment conducted at Vanderbilt lab in 2011 produced an observable, repeatable out-of-body experience [source: Salisbury].

The trick's usefulness in neuroscience research belies its simplicity: If you've got a relatively lifelike rubber hand lying around, along with a couple of helpers, you can create the illusion right now.

You don't need laboratory resources to carry out the startling (and a wee bit disturbing) trick on the brain. What you do need is the following:

Sit your subject on the chair with one arm, let's say the right one, extended and resting on the table. Position your divider as close as possible to the subject's left shoulder, and then move the subject's left arm to the other side of it, so she can't see it, but with the hand still on the table. Drape a towel over her left shoulder and down onto the table in front of her. At the end of the towel, place the rubber hand approximately where her actual hand would be if it were her own arm under the towel.

This last part is important. The illusion works best when the position of the rubber hand is realistic.

Now, the trick: You and your helper simultaneously stroke a hand -- one of you the left, hidden hand, and the other the visible, rubber hand. The strokes should be as closely matched as possible. Your subject should be watching the rubber hand being stroked.

Within seconds (the average was 11 in a 2004 study at University College London), your subject will likely feel like the rubber hand is her own hand -- that it is part of her physical self, the body she owns [source: Science Daily]. Show knows, intellectually, it isn't; but her brain is telling her different. Her brain has determined that she owns the rubber hand.

In the lab, researchers do have the advantage of access to fMRI, or functional magnetic resonance imaging, which measures activity in various areas of the brain in real-time. In 2004, scientists discovered that when the illusion took hold, one specific area lit up, revealing excitingly concrete evidence of what, exactly, is going on here.

Why the Trick Works

There is nothing simple about the brain, or about the perception of self and other. In this case, though, at least one thing is clear: The premotor cortex is directing the misperception.

The premotor cortex, located in the motor cortex of the frontal lobe, plays a central role in body ownership. It guides the recognition that this arm is mine, the arm intertwined with mine is his, and the hammer I'm holding is an external object.

The rubber hand illusion has provided evidence of how the premotor cortex uses data to determine ownership. It apparently relies on multiple channels of sensory input, and it weights those channels as more or less reliable in making its decision.

The study plays with the senses of vision and touch: Visually, the subject can't see her own hand, but she can see the rubber hand, which is about where her hand would be if it were there; the fake hand looks a lot like hers; and it's being stroked. Tactilely, she feels her own, hidden hand being stroked, and it feels just like the stroking she can see.

The premotor cortex takes this in. (Positional input plays a role here, too, which is why the hand needs to be placed in a realistic location; the subject needs to perceive it as a viable stand-in for her own hand.) It integrates the visual data and the tactile data, which don't quite match up, and attempts to make sense of it all.

When faced with discrepancies between visual and tactile input, the brain tends to place higher value on the visual [source: Kruglinski]. The result in the rubber hand illusion goes something like this: I see a hand that looks a bit like mine, and I see someone stroking it. I feel my own hand being stroked. The hand I see being stroked must be my hand. That the subject has no tactile sense of the rubber hand is, in effect, tossed out of the equation.

Beyond explaining the brainwork behind a really cool party trick, this insight into the brain's integration and management of multiple, possibly contradictory sensory inputs might open the door to a greater understanding of a wide range of diseases with symptoms of body- and self-related distortions, including schizophrenia, phantom-limb syndrome, body dysmorphic disorder, anorexia and, of course, stroke [sources: Science Daily, Ravilious]. It could eventually tell us precisely why a particular stroke victim may no longer recognize her right arm as her own -- and maybe even how to put her perceived body back together.

For more information on body ownership, distortions of self, and a whole bunch of related illusions, check out the links on the next page.

Hope for the Self?

Findings in the rubber-hand illusion and related studies may shed light on symptoms of stroke, schizophrenia, phantom-limb syndrome, body dysmorphic disorder and anorexia, along with other conditions with elements of a distorted physical self

Author's Note: How could you confuse a rubber hand for your own hand?

The brain and its integration of sensory stimuli is an enormous topic, and I tried to limit this article's scope to the specifics of the rubber-hand illusion in the hopes of making it manageable for readers of all backgrounds (and avoid producing a tome). Note, however, that while the premotor cortex is at the center of the rubber hand illusion, as it appears to be in control of body ownership, the parietal cortex is also involved in sensory interpretation, and it appears to control body image (shape and size). In my brief mention of disease processes that may be elucidated by findings in studies like the rubber hand illusion, the parietal lobe plays a central role in at least two: anorexia and body dysmorphic disorder. There is a very cool illusion that sheds light on body-image disruptions, which you can read about here in PLOS Biology.

Julia Layton "How could you confuse a rubber hand for your own hand?" 19 October 2012.
HowStuffWorks.com. <https://science.howstuffworks.com/innovation/science-questions/how-could-you-confuse-a-rubber-hand-for-your-own-hand-.htm> 19 September 2021
Print | Citation 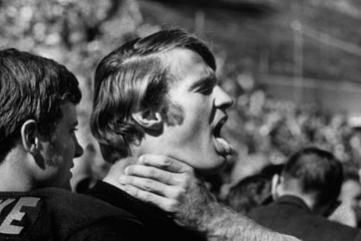 Up Next
How Alien Hand Syndrome Works
Explore More
You May Like
Why does the moon look so much bigger when it is near the horizon?
Explore More 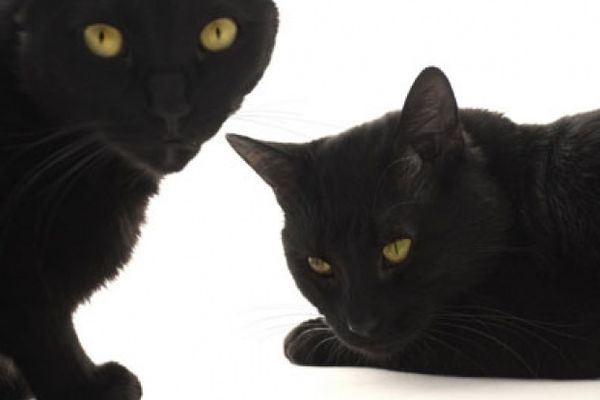