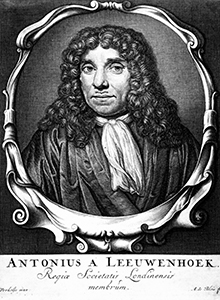 In 1678, Antoni van Leeuwenhoek reported that he had observed "little animals" -- protozoa — through a microscope.
Photos.com/Getty Images Plus

The discovery of the cell was made possible by the invention of the microscope, which was made possible by improved lens-grinding techniques. Antoni van Leeuwenhoek (1632-1723), a Dutch tradesman, learned to grind lenses and assemble them into simple microscopes. His contemporary Robert Hooke (1635-1703) used such an instrument to observe cork cells, sketches of which appeared in his 1665 publication "Micrographia." Inspired by Hooke's work, Leeuwenhoek began making microscopic examinations of his own. In 1678, he reported to the Royal Society that he had discovered "little animals" -- bacteria and protozoa -- in various samples. The society asked Hooke to confirm Leeuwenhoek's findings, and he did.

T­his paved the way for wide acceptance that a hidden world existed just beyond the limits of human vision and encouraged many scientists to take up the microscope in their investigations. One such scientist was German botanist Matthias Jakob Schleiden (1804-1881), who looked at numerous plant samples. Schleiden was the first to recognize that all plants, and all the different parts of plants, are composed of cells. While having dinner with zoologist Theodor Schwann (1810-1882), Schleiden mentioned his idea. Schwann, who came to similar conclusions while studying animal tissues, quickly saw the implications of their work. In 1839, he published "Microscopic Investigations on the Accordance in the Structure and Growth of Plants and Animals," which included the first statement of the cell theory: All living things are made up of cells.

Then, in 1858, Rudolf Virchow (1821-1902) extended the work of Schleiden and Schwann by proposing that all living cells must rise from pre-existing cells. This was a radical idea at the time because most people, scientists included, believed that nonliving matter could spontaneously generate living tissue. The inexplicable appearance of maggots on a piece of meat was often given as evidence to support the concept of spontaneous generation. But a famous scientist by the name of Louis Pasteur (1822-1895) set out to disprove spontaneous generation with a now-classic experiment that both firmly established the cell theory beyond doubt and solidified the basic steps of the modern scientific method.