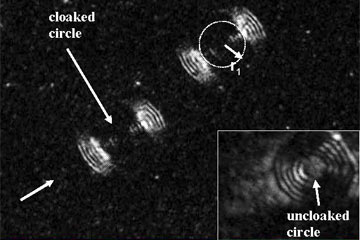 In 2007, the University of Maryland's Igor Smolyaninov led his team even farther down the road to invisibility. Incorporating earlier theories proposed by Purdue University's Vladimir Shaleav, Smolyaninov constructed a metamaterial capable of bending visible light around an object.

A mere 10 micrometers wide, the Purdue cloak uses concentric gold rings injected with polarized cyan light. These rings steer incoming light waves away from the hidden object, effectively making it invisible. Chinese physicists at Wuhan University have taken this concept into the audible range, proposing the creation of an acoustic invisibility cloak capable of diverting sound waves around an object.

For the time being, metamaterial invisibility cloaks are somewhat limited. They're not only small; they're limited to two dimensions -- hardly what you'd need to vanish into the scenery of a 3-D war zone. Plus, the resulting cloak would weigh more than even a full-grown wizard could hope to lug around. As a result, the technology might be better suited to applications such as hiding stationary buildings or vehicles, such as a tank.