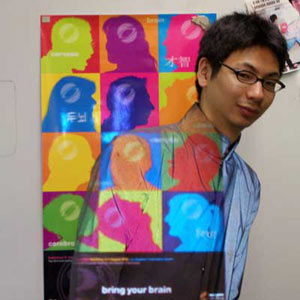 Optical camouflage technology won't make you invisible to multi-eyed Beholder monsters -- or even to stray cats and squirrels.
Photo courtesy ©Tachi Laboratory, the University of Tokyo

Ready to slip into some old-school optical camouflage fashions?

This technology takes advantage of something called augmented-reality technology -- a type of technology first pioneered in the 1960s by Ivan Sutherland and his students at Harvard University and the University of Utah.

Optical camouflage delivers a similar experience to Harry Potter's invisibility cloak, but using it requires a slightly complicated arrangement. First, the person who wants to be invisible (let's call him Harry) dons a garment that resembles a hooded raincoat. The garment is made of a special material that we'll examine more closely in a moment.

Next, an observer (let's call him Professor Snape) stands before Harry at a specific location. At that location, instead of seeing Harry wearing a hooded raincoat, Snape sees right through the cloak, making Harry appear to be invisible. The above photograph shows you what Snape would see. And if Snape stepped to the side and viewed Harry from a slightly different location? Why, he'd simply see the boy wizard wearing a silver garment. Scowls and detentions would likely follow. Lucky for Harry, his fictional cloak affords 360-degree protection.

Optical camouflage doesn't work by way of magic. It works by taking advantage of something called augmented-reality technology -- a type of technology first pioneered in the 1960s by Ivan Sutherland and his students at Harvard University and the University of Utah. You can read more about augmented reality in How Augmented Reality Works, but a quick recap will be helpful here.

Augmented-reality systems add computer-generated information to a user's sensory perceptions. Imagine, for example, that you're walking down a city street. As you gaze at sites along the way, additional information appears to enhance and enrich your normal view. Perhaps it's the day's specials at a restaurant or the showtimes at a theater or the bus schedule at the station. What's critical to understand is that augmented reality is not the same as virtual reality. While virtual reality aims to replace the world, augmented reality merely tries to supplement it with additional, helpful content. Think of it as a heads-up display (HUD) for everyday life.

Most augmented-reality systems require a user to look through a special viewing apparatus to see a real-world scene enhanced with synthesized graphics. They also call for a powerful computer. Optical camouflage requires these things as well, but it also necessitates several other components. Here's everything needed to make a person appear invisible:

On the next page, we'll look at each of these components in greater detail.