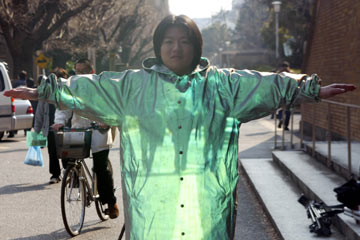 As you can see in this image, the experience closely resembles walking directly in front of a movie projection screen, only with a real background.
AP Photo/Shizuo Kambayashi

The projector then shines the modified image on the garment, by shining a light beam through an opening controlled by a device called an iris diaphragm. This diaphragm is made of thin, opaque plates, and turning a ring changes the diameter of the central opening. For optical camouflage to work properly, this opening must be the size of a pinhole. Why? This ensures a larger depth of field so that the screen (in this case the cloak) can be located any distance from the projector.

If properly positioned in front of the user's eye, the combiner allows the user to perceive both the image enhanced by the computer and light from the surrounding world. This is critical because the computer-generated image and the real-world scene must be integrated fully for the illusion of invisibility to seem realistic. The user has to look through a peephole in this mirror to see the augmented reality.

On the next page, we'll look at how this whole system comes together.