The Basics of an Atom 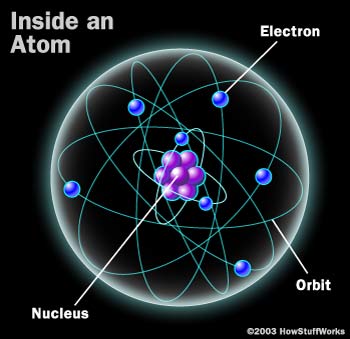 An atom, in the simplest model, consists of a nucleus and orbiting electrons.

There are only about 100 different kinds of atoms in the entire universe. Everything we see is made up of these 100 atoms in an unlimited number of combinations. How these atoms are arranged and bonded together determines whether the atoms make up a cup of water, a piece of metal, or the fizz that comes out of your soda can!

Atoms are constantly in motion. They continuously vibrate, move and rotate. Even the atoms that make up the chairs that we sit in are moving around. Solids are actually in motion! Atoms can be in different states of excitation. In other words, they can have different energies. If we apply a lot of energy to an atom, it can leave what is called the ground-state energy level and go to an excited level. The level of excitation depends on the amount of energy that is applied to the atom via heat, light, or electricity.

Above is a classic interpretation of what the atom looks like.

This simple atom consists of a nucleus (containing the protons and neutrons) and an electron cloud. It's helpful to think of the electrons in this cloud circling the nucleus in many different orbits.