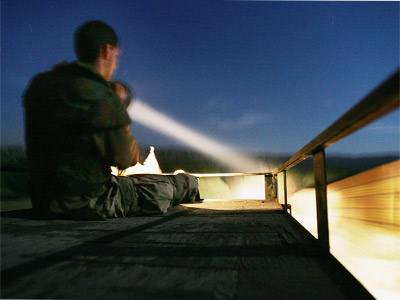 Mike "Big Bird" Bird won't be armed with an LED Incapacitator since he's a citizen volunteer working with official agents to scan the U.S.-Mexico border for illegal immigrants, but members of the actual U.S. Border Patrol will.
David McNew/­Getty Images

­A law enforcement officer stands at a border crossing. The officer has to apprehend a suspect in a vehicle without shooting him. The officer just needs to disorient the suspect long enough to control him. What are the officer's options?

He could use a stun gun or a Taser, but that assumes he's within arm's reach of the suspect. He's not. Plus, a Taser can induce a heart attack in certain suspects.

What about shining a laser into the vehicle and distracting the suspect? Lasers can act over a distance. In fact, people have used this technique illegally to distract airplane pilots during takeoff and landing, and the U.S. military has employed this method in Iraq when inspecting vehicles with suspected terrorists [source: FoxNews.com]. However, lasers can also damage a suspect's eyes, possibly leading to blindness.

­The officer's best option may be a strobe light. The rapid, bright flashes from the strobe overload the suspect's visual system and temporarily disorient him. It's called strobing, although you probably won't find that verb in the d­ictionary yet.

Scientists at Intelligent Optical Systems in Torrance, Calif., have developed a rapid, strobe system that not only distracts the suspect, but also makes him rapidly nauseous, if not violently ill. Called an LED Incapacitator (LEDI), the device relies on light-emitting diodes. The U.S. Department of Homeland Security awarded the company a $1 million grant to develop and test its nonlethal weapon.

Intelligent Optical Systems doesn't have a lock on the market. Several similar nonlethal devices exist, such as the Active Denial System (ADS), which uses microwave radiation. The ADS emits millimeter waves that heat up water in the skin's outer layers and cause a burning sensation. The idea is that the millimeter waves don't penetrate far into the skin, so no permanent damage results. The rather large ADS is mounted on a truck. It's effective for controlling large crowds, but it would be tough for a single officer or soldier to wield.

The Personnel Halting and Stimulation Response (PHaSR) uses two low-power diode lasers to distract the suspect without blinding him. Although the PHaSR can act from a distance, it's not as small or portable as the LEDI, and it sucks up more power. Both the PHaSR and the LEDI are still in the development and testing phases. Neither weapon has been issued to soldiers or law enforcement or is available to the public.

Up next, we'll see why the small, portable LEDI makes you want to hurl.

The main parts of the human eye
2009 HowStuffWorks

T­he LED Incapacitator (LEDI) uses bright, short pulses of light to disorient the subject. Law enforcement officers have used strobe lights before. The LEDI is unique because it pulses in different colors (red, green and blue), spatial patterns, frequencies and intensities. The combined effect of the different colors and patterns temporarily blinds, disorients and nauseates the subject but doesn't cause any damage. The feeling of disorientation lasts for a few minutes, long enough for the suspect to be subdued. The LEDI has even been called the "puke ray" because of the nausea it causes.

How does strobing disorient a person? It helps to know how we process visual information. The lens of your eye focuses an image of the world on the retina, a dense collection of light-perceiving cells called photoreceptors. Once the image is taken and converted to an electrical impulse, the optic nerve transmits it to the brain's visual cortex, which interprets the pictures. The brain has a limited rate or frequency by which it can receive and process visual information. If visual information arrives faster than the brain can process it, then the person becomes temporarily incapacitated. The frequency required to overwhelm the brain is about 7 to 15 hertz [source: Rubtsov].

Strobing disrupts the flow of the visual information in two ways. First, the brightness of the strobe's flash creates afterimages in the brain. If you look at a bright light -- please don't choose the sun -- and then close your eyes, you'll "see" an afterimage of the light. Second, the frequency of the flashing hovers near 15 hertz and impairs the brain's ability to process visual information, which produces disorientation and nausea. Once the LEDI is turned off, the nausea lingers for a few minutes as the brain recovers.

Let's see how the LEDI works. 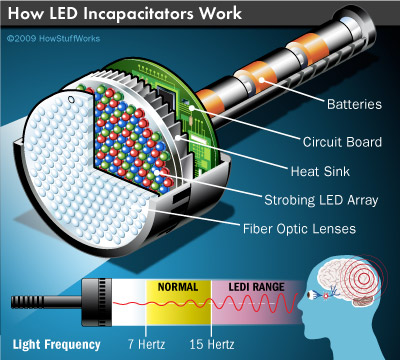 ­If you're not feeling too queasy, look over the links on the next page to learn more about light, lightsabers and lasers.