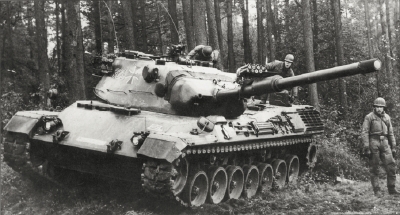 In 1955, ten years after the end of World War II, the Federal Republic of Germany was allowed to rearm and was invited to join the North Atlantic Treaty Organization (NATO).

In 1957 Germany and France, and later Italy, agreed to cooperate in designing and building a new Main Battle Tank (MBT). Two design teams were formed in Germany and one in France. The first prototypes, both from German teams, were ready for testing in 1960.

In 1962 trials between the French design, the AMX-30, and German tank prototypes were conducted. The following year the German government decided that the Standardpanzer design, now known as the Leopard, was more suitable for its needs. Thus, the design partnership ended.

France sent the AMX-30 into production. Italy first thought to design and build its own MBT, but then decided to buy the American M-60 MBT as a replacement for its M-47 medium tanks.

Given Germany's history of successful tank production and use, it would seem logical that the Leopard 1 Main Battle Tank would be an extension of the technology developed for the Panther and Tiger series of tanks. In fact, it is not.

Following Germany's unconditional surrender in May 1945, the Allies made certain that all military production facilities were completely dismantled. So the Germans had to begin from scratch when they designed and built the Leopard tank.

The Leopard 1 is an MBT of 1960s derivation. It is heavily gunned and armored, although less so than the Soviet MBTs it was designed to face.

The Leopard 1 has a conventional hull divided by a fireproof bulkhead into an engine compartment aft and a crew compartment forward. The entire turret is cast in one piece.

The commander and gunner are in the turret on the right. The loader is on the left in the turret and hefts shells into the main gun's breech, which opens and ejects the empty shell on recoil. The driver is in the front of the hull on the right-hand side.

The tank can be sealed and overpressurized for use in a nuclear-biological-chemical warfare environment.

To learn about the Leopard 1 Main Battle Tank's equipment, continue to the next page.