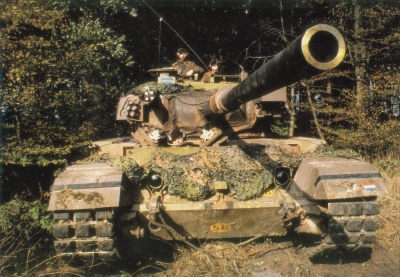 The Leopard 1 Main Battle Tank carries a maximum armor of 2.75 inches and a minimum of .33 inch on the top of the hull. Turret armor ranges from 2 inches on the front to 2.4 inches on the sides and rear.

The turret mantlet, which furnishes additional armor protection for the turret front, is also 2.4 inches thick.

An 830-horsepower Daimler-Benz V-10 diesel engine gives the Leopard 1 Main Battle Tank a power-to-weight ratio nearly equal to the French AMX-30 MBT, even though the latter is 4.4 tons lighter.

The Leopard 1 is capable of sustained road speeds of 40 miles per hour and has a range of 372 miles. The engine is designed so that it can be extracted and replaced in the field within 20 minutes.

The Leopard's main armament is the British 105mm L/7 main gun, which can fire an armor-piercing projectile at nearly 4,500 feet per second. The tank also carries two 7.62mm NATO machine guns, one coaxial and one mounted on a ball pivot atop the turret for antiaircraft use.

The coaxial machine gun, originally intended for estimating range for the main gun, was later replaced by an optical gun sight.

There have been four models of the basic Leopard 1 Main Battle Tank. The first was the Al, fitted with a gun stabilization system, new tracks, and a thermal heat sleeve on the main gun. This version was later modified to A1A1 standards with the addition of bolt-on, or appliqué, armor.

The Leopard 1A2, the second model, has a stronger cast-steel turret, an upgraded nuclear-biological-chemical protection system, and night vision image intensifier equipment.

The third model, the 1A3, was fitted with new spaced armor and an integral storage bin at the rear of the turret. The new turret armor comprised a series of sloped planes and had a distinctive wedgelike mantlet.

The final model of the Leopard 1 was the 1A4, which was given a new fire control system.