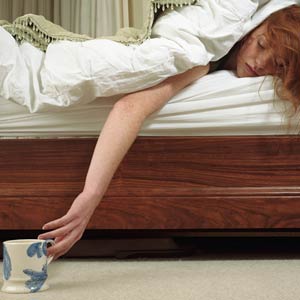 If you've got the flu, stay home, get under the covers and keep hydrated.
Alex and Laila/Stone/Getty Images

Unfortunately, there isn't a pill or a liquid you can take that will "cure" you of the flu. Penicillin and other antibiotics won't work, because they only kill bacteria, and the flu is caused by a virus.

There are, however, a few approved antiviral drugs, including Symmetrel, Flumadine, Relenza and Tamiflu, that have been shown to shorten the duration of the illness.

By stopping the virus from spreading to other cells, Relenza and Tamiflu lessen the severity and shorten the duration of the flu infection.

­Symmetrel and Flumadine also lessen the severity and shorten the duration of the flu, but they only work against influenza A. Both are antiviral medications that work by stopping the virus from replicating. All four drugs are by prescription only and do have potential side effects, so they should only be taken with the advice of a doctor.

The best advic­e for treating the flu is to rest and drink plenty of liquids. Over-the-counter cold and flu remedies can alleviate some of the symptoms, at least temporarily. Aspirin may relieve fever and aches, but it should not be given to children and adolescents because of the risk of a rare but potentially dangerous illness called Reye's Syndrome.