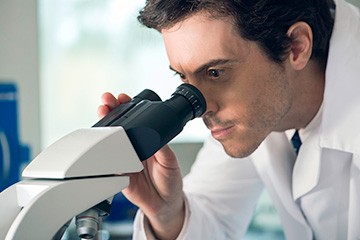 The discovery of giant viruses is changing the face of virology.
PhotoAlto/Frederic Cirou/Getty Images

I only like the word "giant" relative to fun stuff, like beers and brownies. Viruses I prefer to be tiny and easily overcome, if not completely absent from my life. So it's easy to see why the ever-increasing publicity of "giant viruses" is whipping people into a complete frenzy. Before we resort to living in plastic bubbles, though, it's important to understand the basics of giant viruses and what types of risks they might or might not pose.

To draw an accurate picture, it helps to know what a so-called "standard" virus looks like. "Typically, we think of a virus as having a handful of genes, making a few proteins to replicate themselves," explains Steven W. Wilhelm, Ph.D., graduate director and associate head of the department of microbiology at The University of Tennessee. "These giant viruses are a bit of a different story in that they contain dozens or hundreds of genes."

According to Wilhelm, giant viruses are still so new that they lack hard-and-fast criteria. However, the most basic rule of thumb is that these viruses have genomes that total more than a quarter million base pairs in size. "The genome is kind of the blueprint of the cell, and the base pairs are the components that make up that blueprint," he says.

Even if you don't fully grasp what that means, this comparison will bring home the difference between a normal virus and a giant version. Take, for instance, the human immunodeficiency virus (HIV), which is probably the most studied virus in the world. HIV sports 9,749 base pairs. By contrast, the largest giant virus currently known is Pandoravirus, which boasts 2 million base pairs, according to Wilhelm. Pandoravirus also has DNA that dwarfs regular viruses, with 2,500 genes versus the standard 10 found in most smaller versions. It also far outsizes other viruses at 1 micron in length (a thousandth of a millimeter), as opposed to normal viruses that range between 50 and 100 nanometers (there are 1,000 nanometers in a micron) [source: Dell'Amore].

In essence, we're talking about regular viruses gone Hulk, albeit on a microscopic level. So is it time to freak out, or should we take a wait-and-see approach?

The Target Audiences of Giant Viruses

I know that stomach bug you had recently seemed like the end of the world. In fact, the only good thing that came out of it was probably a modest weight loss! So if that's a teensy-weensy baby virus when compared with a Pandoravirus, it's safe to assume that we're all doomed, right? Breathe a sigh of relief, my friends, for that is probably not the case.

"The majority of these giant viruses have been shown to infect amoeba," Wilhelm explains. Amoeba are a far cry from human beings, since they are microscopic, single-celled organisms that primarily reside in water [source: New World Encyclopedia]. Wilhelm also notes that single-cell algae and protozoan grazers are other typical targets of giant viruses, but insists that the danger to humans is minimal, if present at all. "We have no real evidence that these viruses do anything to humans or animals," he says.

If giant viruses are no harm to humans, then what's the big deal? As it turns out, some of them have the potential to inadvertently affect people through ecologic and economic avenues. For example, Wilhelm and his team have spent years studyingAureococcus anophagefferens virus (AaV), which is unwittingly hosted by algae of the same name (the virus is usually named after the algae). The affected algae are believed to play a role in the growth of "brown tide blooms" on the East Coast of the United States, although it has spread to other areas now.

Springtime blooms of AaV present a major problem to coastal areas, such as Long Island's Great South Bay, because they take over the area, preventing the growth of sea grass. As a result, there has been a huge decline in shellfish and other marine life, negatively impacting the appearance, functionality and economic potential for many affected areas [source: Columbia University].

Figuring the virus out since it first appeared in the 1980s has been a lengthy process, however. "In 2014 we completed the genomic sequence and were surprised that it fit into this giant virus category," says Wilhelm of the virus, which boasts 370,000 base pairs. It also presented some unforeseen surprises. "Not only does it have genes that are similar to other giant viruses, it also has genes similar to the host, to bacterial genes, to bacterial virus genes," he says. "It's a real mosaic genetically."

Still, some scientists appear to be poking a sleeping bear by unearthing viruses from long ago. Are they putting us in harm's way, however inadvertently?

Researchers in 2014 discovered ATCV-1, an algal virus that has been affectionately dubbed the "stupidity virus" by various media outlets. Human throat cultures, coupled with cognitive abilities tests, revealed that people who tested positive perform less impressively on mental skill tests than their non-virally affected counterparts. Many scientists are waiving the findings until they can be replicated [source: UPI Staff].

Could Giant Viruses Be Disastrous for People? 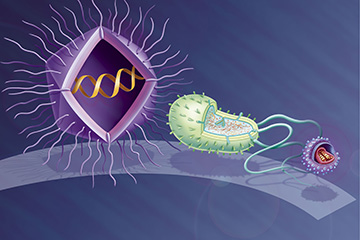 An artist's rendering of a Mimivirus (left) compared with the bacterium Escherichia Coli (center) and an average virus (right).
SIP/UIG via Getty Image

The alarm began in 1992 with the accidental discovery of the world's first giant virus, known as Mimivirus. It was so large that scientists originally thought it to be a pneumonia-causing bacterium [source: Wessner]. "This really turned the world on its head," says Wilhelm of the scientific community's response to the discovery.

Then, scientists discovered a new giant virus in the Siberian permafrost in 2014, after roughly 30,000 years deep in slumber. Once put in contact with amoeba, the virus, known as Pithovirus sibericum, invaded amoeba like a kid attacks birthday cake. Fortunately, the researchers were able to determine that the virus cannot infect animals or humans, much like their other giant virus brethren [source: Sirucek]. Phew.

This discovery has since raised concerns that more ancient viruses will eventually be unleashed on the world, thanks to the effects of global warming. "They've done an interesting study," remarks Wilhelm. "It adds some new perspective on different viruses that are out there and the possible genes they could contain, but I think the environmental implications of permafrost thawing are much bigger concerns," he says.

These giant viruses have been around longer than humans (practically rubbing elbows with us, in fact), but modern science only just managed to "discover" them. "We've been living with them for probably hundreds of millions, if not billions of years," says James L. Van Etten, Ph.D. with the University of Nebraska and the Nebraska Center for Virology. "They've been out there all this time."

So thawing permafrost is an issue, just not for the reason many people think, at least in the current view of some experts. The environmental effects of global warming are more of a hazard than the fear of some Neanderthal disease being newly unleashed to the world.

Still, all these assurances aren't going to completely quell the fears of the general public in regard to giant viruses, although a less scary-sounding name probably would have helped the case. So how did these viruses get so big?

Changing the Face of Virology

If you're wondering how these viruses get to be so enormous, you're not alone. As it turns out, that's the million-dollar question in the scientific community. "Nobody knows," says Van Etten. "There are some hypotheses, but certainly not one hypothesis that all scientists agree with," he explains, adding that some people believe that giant viruses have grown from smaller viruses, but nobody knows yet why they would have done that.

In fact, we've likely just begun to scratch the surface of giant viruses. "There are new ones being discovered all the time," Wilhelm says. "We really don't have any idea about the diversity, how many there are or how prevalent they are." He notes that at least one study has suggested they are mostly found in ocean environments. Scientists are very focused on attempting to find out why these genomes are so large. This is especially interesting because most normal viruses are actually under evolutionary pressures to reduce their genome size because it's so taxing for them to maintain high numbers, according to Wilhelm. "We call this genome streamlining," he explains. "Giant viruses go against the grain."

The makeup of giant viruses is also making waves in the virology community, since these big boys are sporting genes that were previously associated only with cellular life forms. For example, functional genes that are in charge of different processes, like nutritional transport, have been found in their depths. "We're starting to really blur the boundaries that we would have historically drawn between viruses and cells, in terms of function," explains Wilhelm.

As a result of these many findings, long-held opinions about viruses are being challenged. "It's clear that the field of virology has to re-think how they define viruses," says Van Etten, adding that previous standards held that, to qualify as a virus, it had to be able to pass through a filter of a certain size, and that this test is probably why the giant versions were unknown for so long.

Although many unknowns remain, a couple of principles are crystal-clear. "We're starting to expect that we're going to find relatives of these viruses everywhere," says Wilhelm. Also, the impact of all types of viruses is not to be underestimated. "Viruses control microbes, ergo viruses control the planet."

After talking to a couple of the most respected minds in the giant virus field of study, I'm confident that smaller viruses are much more of a threat to me than something that would attack amoeba. Even if that changes, I have hand sanitizer, and I'm not afraid to use it!