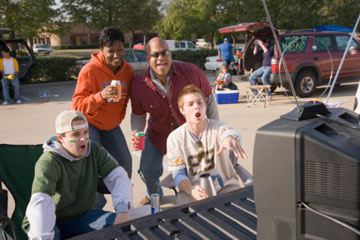 Go ahead, just try to turn off the game in the last five minutes. See more emotion pictures.
DreamPictures/Getty Images

As the animals we are, humans only need a few things to continue along as a species. We need to find food. Being omnivores, we have a wide selection available to us. We have to find clean water to drink. We need shelter to protect us from the elements. And we need to reproduce. Other than that, we don't have too many more basic requirements.

But a cursory glance around human culture shows us just how far we've exceeded these basic needs to create an extremely complex -- and, some may argue, overly complicated -- world for ourselves. The Internet, the telephone, planes, trains and automobiles, our houses, our clothes, our diets, our toys -- all of these things by far exceed our basic needs. We humans have a tendency to go above and beyond.

Such is the case with curiosity. This seemingly instinctual urge to gain information we don't really need is extraneous -- and at its most extreme, dangerous. Consider standing outside a dark cave. It's curiosity that might draw one to investigate its contents, and perhaps those contents are an angry mother bear and her cubs. Viewed most basically, the existence of curiosity is counterintuitive to evolutionary theory: The most curious among us should've been killed off before getting the chance to reproduce, with the trait losing out to natural selection. We don't really need to do crossword puzzles or find out just exactly what's inside a dark cave. And yet, we have an almost undeniable drive to do so. To paraphrase curiosity researcher George Lowenstein, just try to turn off the television in the last couple minutes of a close football game.

We've long been aware of our curious natures, and for the most part, it's been a revered trait among humans. In the West, the Middle Ages represent one of the few times in history when curiosity has been reviled, considered a vice at the suggestion of St. Augustine who, in his Confessions, considered it a distraction from exploring ourselves [source: Pihas].

This strange motivation to explore our world beyond what we need to survive has taken us to the moon, expanded our mastery of internal medicine and lent us a better understanding of our very genes. At the same time, however, we don't fully understand the vehicle which has allowed us to arrive at such breakthroughs. Curiosity, appropriately and delightfully, remains a mystery to us.

Find out about some theories of this wonderful and inexplicable trait on the next page.