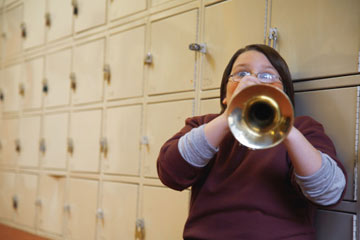 Even taking up the trumpet can be stymied by a fear of failure. Fear is counterproductive to curiosity.
Ableimages/Getty Images

The idea that curiosity originates inside or outside us has led to two distinct classifications of types of curiosity: state and trait. These two terms describe the way humans engage (or don't engage) in curious behavior. Remember that pencil that moved on its own? The fleeting arousal of curiosity that would evoke curiosity as a reaction is known as state curiosity. It's generally based on an external situation and can be as mundane as wondering what a truck is doing making deliveries at a nearby business at 2:00 a.m. to things as esoteric as considering the afterlife during a funeral.

If all humans are curious by nature, then state curiosity appears to be the best descriptor of this aspect of ourselves. State curiosity tends to be related to high levels of reward, such as excitement [source: Kashdan and Roberts].

The concept that curiosity resides within is known as trait curiosity. This relates to the characteristic of some people to have a lifelong interest in learning, simply for the sake of learning. Throughout its study, trait curiosity has been linked to all manner of behavior, from experimentation with drugs and arson to high intellect and fearlessness. In general, however, it's a positive characteristic.

While studies that attempt to measure trait curiosity often find contradictory evidence to other, similar studies, we can generally look at trait curiosity as a characteristic latent in all of us, but only exhibited in a high order in some of us. To a modern school of psychological thought, trait curiosity is stifled in those who don't display it due to anxiety and fear. Indeed, we risk failure when we venture out to learn new things; we may not master the musical instrument we take up, our efforts to finish a crossword puzzle may be frustrated, or we could end up being injured on a scuba diving trip. You can look at curiosity as the urge that draws us out of our comfort zones and fear as the agent that keeps us within its boundaries [source: Jacobs].

Psychologists further classify trait curiosity based on the variation of interests pursued. Breadth of curiosity is the type where an individual may be interested in a wide array of topics. Depth of curiosity is the level of interest in a single topic. That topic could be anything: dinosaurs, a foreign language, anthropology, astronomy. Any truly deep interest in a specific subject tends to describe depth trait curiosity.

This reveals another big question relating to curiosity: What do we get out of it?