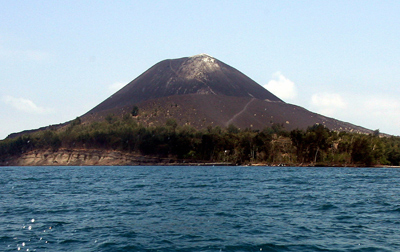 A volcano in Sumatra like this one is thought to have forced humanity into an evolutionary bottleneck after it erupted 70,000 years ago.
Jewel Samad/AFP/Getty Images

Cann and her fellow researchers estimated that Mitochondrial Eve lived about 200,000 years ago. With their margin of error included, she would have been alive between 500,000 and 50,000 years ago. Given that Eve is thought to have lived duri­ng a time when there were other women alive, how is it that all of us alive today descended from her alone? There are a couple explanations for how only Eve’s mtDNA alone could have survived, and most likely a combination of converging factors is responsible.

The likeliest possibility is that an evolutionary bottleneck occurred among humankind while Eve was alive. This is a situation where a large majority of the members of species suddenly die out, bringing the species to the verge of extinction. This sudden decrease in numbers isn’t due to any kind of failure to adapt. Instead, it's more likely the result of a catastrophe of some sort, for example, the result of a comet hitting the Earth. Afterward, just a few members remain to repopulate the group and continue to evolve. Bottlenecks are suspected to have taken place at different times in humanity’s history, so it’s not a farfetched notion that an event like this could have taken place during Eve’s lifetime.

A report issued in 1998 concluded that about 70,000 years ago, humanity was reduced to only about 15,000 people on the whole planet [source: Whitehouse]. With very few people spread out across the planet, humankind was indeed on the verge of extinction. The event that caused the near-loss of our species was an eruption of Mount Toba in Sumatra. This volcanic eruption was so immense that it lowered global temperatures, killed off the animals and plants that nourished humans and spurred the coldest ice age the planet has seen, lasting 1,000 years.

­The Mitochondrial Eve theory evokes similar scenarios. If the human population was reduced dramatically, and there weren’t many women around to have kids, the stage is set for one “Lucky Mother,” as Cann puts it, to emerge as a most recent common ancestor. It’s possible that after a few generations, the mtDNA of the other women died out. If a woman produces only male offspring, her mtDNA won't be passed along, since children don’t receive mtDNA from their father. This means that while the woman’s sons will have her mtDNA, her grandchildren won’t, and her line will be lost.

It’s possible that this was the cause of Eve emerging as the sole “Lucky Mother” who in essence gave birth to us all.

Having a bit of trouble understanding? Not to worry. Read the next page for an illustration of what mtDNA is theoretically capable of on the next page. It’ll clear things up a bit.