An Example of mtDNA Research 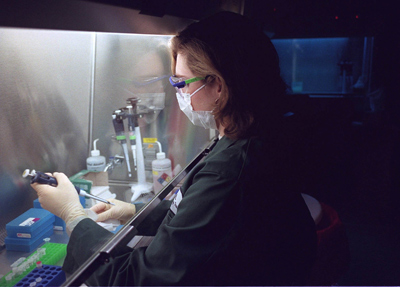 Although talk of genetic mutations and DNA sequences makes it seem complex, at its core, tracking mtDNA is based on a deceptively simple notion: People whose ancestors were once closely related should have almost identical mtDNA. mtDNA can undergo mutations over time, but it takes time for these mutations to occur. Logically, the fewer there are, the less time has gone by since two families' ancestors diverged. Those people who have just a few differences in their mtDNA sequences would be more recently related than those sequences which bear many differences.

Think about it this way. Say your great-great-grandmother on your mom's side -- whom we'll call Mildred -- had a sister, whom we'll call Tillie. Both shared identical mtDNA which they received from their mother. But imagine that Tillie and Mildred had a terrible argument, and Tillie moved across the country, while Mildred's descendants -- including you -- stayed put.

Tillie and Millie never spoke again. Both women gave birth to girls, and so their matrilineal mtDNA was passed on. But as the generations continued, the families of the two grew less and less aware of the existence of the other branch, until neither line was aware of the other. But the two lines are about to be inadvertently reunited. Researchers placed a national advertisement asking for test subjects for a study of recent human population trends using mtDNA for mapping. By coincidence, you and a distant cousin of yours on Tillie's side of the family both decide to volunteer.

After they collect a DNA sample from you, the researchers compare your mtDNA to the sequences from the other candidates. Lo and behold -- they find that two volunteers are cousins. Comparing your mtDNA to your cousin's, the geneticists should be able to tell about how long ago Tillie and Mildred had their argument. If they checked the local populations of your area and your cousin's area, they should also be able to tell whether it was Tillie or Millie who migrated, by finding which population shared more of the mtDNA present in your family line -- more people with the same mtDNA means that that sequence has been around longer. What's more, they can also conclude that since you and your cousin share similar mtDNA, you have a most common recent ancestor, the woman who is mother to Tillie and Mildred.

Since it takes a while for mtDNA mutations to occur, it would be pretty difficult for these imagined geneticists to pin down you and your cousin with accuracy, but when this technique is extrapolated over a period spanning tens or hundreds of thousands of years, it becomes much more viable.

Not everyone buys the Mitochondrial Eve theory, however. Read the next page to learn about criticism of the study.