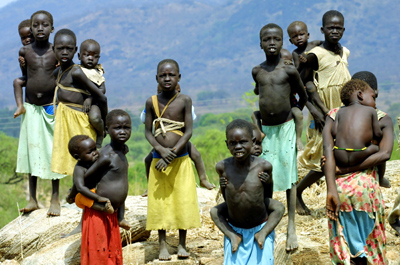 After experiencing criticism for collecting DNA samples from African-Americans rather than Africans in their study, Cann and her colleagues visited people living in Africa, like these Sudanese, to collect their genetic information. The results were the same.
Natalie Behring-Chisholm/Getty Images

Evolutionary mapping through the use of mtDNA is inexact. As mtDNA study continued after the late 1970s, scientists discovered a property known as heteroplasmy -- the presence of more than one sequence of mtDNA found in the same­ person. Even within a single person, there are differences between mtDNA that make comparing one person or group to another tricky.

The 1987 study that introduced the concept of Mitochondrial Eve to the world came under attack when it was pointed out that the "African" population the researchers sampled was actually made up almost entirely of African-Americans. Is it possible that in the few hundred years since Africans had been imported to the Americas against their will that African-Americans' mtDNA had mutated enough so as to render the sample useless? In the face of the criticism, Cann and her colleagues took an additional sample of Africans living in Africa, but found virtually the same results.

­Another problem with mtDNA study is the differences in the rate of mutation. Think about it this way, if you looked at how long it took for a particular sequence of mtDNA to develop a change -- a mutation -- and concluded that it took 1,000 years, then two strains of mtDNA from the same lineage with two mutations would have diverged about 2,000 years ago, right? This is how Cann and company decided Mitochondrial Eve was living around 200,000 years ago.

The researchers said that in their study they assumed that mtDNA mutates at a consistent rate. The problem is, science isn't exactly sure what the rate of mutation for mtDNA is, if there even is a measurable rate. If you look at the rate of mutation among a whole group of organisms, say, all people alive today -- called the phylogenetic rate -- you might conclude that mtDNA mutates at a consistent rate. But if you look at a single family line within that larger group -- the pedigree rate -- you'll most likely find an entirely different rate of mutation.

Since the "mutational clock" used by Cann and her co-authors was called into question, they expanded the date for Eve's existence to between 500,000 and 50,000 years ago.

Decades after the Mitochondrial Eve study was published, the results are still hotly debated. Are we all descended from a most recent common ancestor who lived 200,000 years ago? Can mtDNA even tell us precisely? These questions remain unanswered and frame the future work of evolutionary geneticists. But the 1987 study was groundbreaking enough that it changed the way we think about ourselves as humans. It pointed out that somewhere down the line of history, we are all related.

For more information on evolution and related topics, see the next page.