Browse the article How Cloning Works 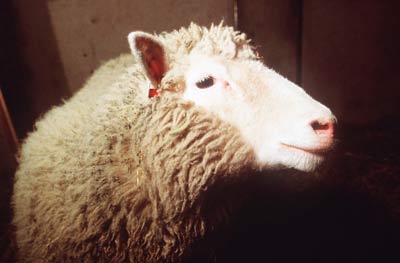 Animal cloning has been the subject of scientific experiments for years, but garnered little attention until the birth of the first cloned mammal in 1996, a sheep named Dolly.
Stephen Ferry/Getty Images

On Jan. 8, 2001, scientists at Advanced Cell Tec­hnology, Inc., announced the birth of the first ­clone of an endangered animal, a baby bull gaur (a large wild ox from India and southeast Asia) named Noah. Although Noah died of an infection unrelated to the procedure, the experiment demonstrated that it is possible to save endangered species through cloning.

Cloning is the process of making a genetically identical organism through nonsexual means. It has been used for many years to produce plants (even growing a plant from a cutting is a type of cloning).

Animal cloning has been the su­bject of scientific experiments for years, but garnered little attention until the birth of the first cloned mammal in 1996, a sheep named Dolly. Since Dolly, several scientists have cloned other animals, including cows and mice. The recent success in cloning animals has sparked fierce debates among scientists, politicians and the general public about the use and morality of cloning plants, animals and possibly humans.

In this article, we will examine how cloning works and look at possible uses of this technology.

Nature­ has been cloning organisms for billions of years. For example, when a strawberry plant sends out a runner (a form of modified stem), a new plant grows where the runner takes root. That new plant is a clone. Similar cloning occurs in grass, potatoes and onions.

­People have been cloning plants in one way or another for thousands of years. For example, when you take a leaf cutting from a plant and grow it into a new plant (vegetative propagation), you are cloning the original plant because the new plant has the same genetic makeup as the donor plant. Vegetative propagation works because the end of the cutting forms a mass of non-specialized cells called a callus. With luck, the callus will grow, divide and form various specialized cells (roots, stems), eventually forming a new plant.

More recently, scientists have been able to clone plants by taking pieces of specialized roots, breaking them up into root cells and growing the root cells in a nutrient-rich culture. In culture, the specialized cells become unspecialized (dedifferentiated) into calluses. The calluses can then be stimulated with the appropriate plant hormones to grow into new plants that are identical to the original plant from which the root pieces were taken.

This procedure, called tissue culture propagation, has been widely used by horticulturists to grow prized orchids and other rare flowers.

Gurdon's experiment to clone a frog

­Plants are not the only organisms that can be cloned naturally. The unfer­tilized eggs of some animals (small invertebrates, worms, some species of fish, lizards and frogs) can develop into full-grown adults under certain environmental conditions -- usually a chemical stimulus of some kind. This process is called parthenogenesis, and the offspring are clones of the females that laid the eggs.

Another example of natural cloning is identical twins. Although they are genetically different from their parents, identical twins are naturally occurring clones of each other.

In the 1970s, a scientist named John Gurdon successfully cloned tadpoles. He transplanted the nucleus from a specialized cell of one frog (B) into an unfertilized egg of another frog (A) in which the nucleus had been destroyed by ultraviolet light. The egg with the transplanted nucleus developed into a tadpole that was genetically identical to frog B.

While Gurdon's tadpoles did not survive to grow into adult frogs, his experiment showed that the process of specialization in animal cells was reversible, and his technique of nuclear transfer paved the way for later cloning successes.

­In 1996, cloning was revolutionized when Ian Wilmut and his colleagues at the Roslin­ Institute in Edinburgh, Scotland, successfully cloned a sheep named Dolly. Dolly was the first cloned mammal.

Wilmut and his colleagues transplanted a nucleus from a mammary gland cell of a Finn Dorsett sheep into the enucleated egg of a Scottish blackface ewe. The nucleus-egg combination was stimulated with electricity to fuse the two and to stimulate cell division. The new cell divided and was placed in the uterus of a blackface ewe to develop. Dolly was born months later.

Dolly was shown to be genetically identical to the Finn Dorsett mammary cells and not to the blackface ewe, which clearly demonstrated that she was a successful clone (it took 276 attempts before the experiment was successful). Dolly has since grown and reproduced several offspring of her own through normal sexual means. Therefore, Dolly is a viable, healthy clone.

­The ­main reason to clone plants or animals is to mass produce organisms with desired qualities, such as a prize-winning orchid or a genetically engineered animal -- for instance, sheep have been engineered to produce human insulin. If you had to rely on sexual reproduction (breeding) alone to mass produce these animals, then you would run the risk of breeding out the desired traits because sexual reproduction reshuffles the genetic deck of cards.

Other reasons for cloning might include replacing lost or deceased family pets and repopulating endangered or even extinct species. Whatever the reasons, the new cloning technologies have sparked many ethical debates among scientists, politicians and the general public. Several governments have considered or enacted legislation to slow down, limit or ban cloning experiments outright. It is clear that cloning will be a part of our lives in the future, but the course of this technology has yet to be determined.

For more information on cloning and related topics, check out the links on the next page.