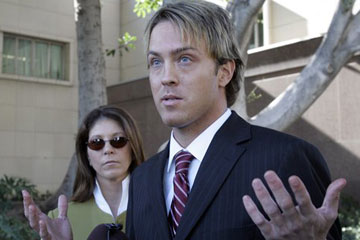 Larry Birkhead was one of at least three men claiming to be the father of Anna Nicole Smith's baby, Danielynn. DNA results ultimately revealed Birkhead to be the biological father.
Nick Ut/Associated Press

In 1985, DNA entered the courtroom for the first time as evidence in a trial, but it wasn't until 1988 that DNA evidence actually sent someone to jail. This is a complex area of forensic science that relies heavily on statistical predictions. In early cases where jurors were hit with reams of evidence heavily laden with mathematical formulas, it was easy for defense attorneys to create doubt in jurors' minds. Since then, a number of advances have allowed criminal investigators to perfect the techniques involved and face down legal challenges to DNA fingerprinting. Improvements include:

The advances that have made DNA evidence an invaluable tool in the criminal justice system have also galvanized public interest. Classroom study of DNA and its properties has become more in-depth and widespread in many schools. And television crime dramas that feature DNA evidence so prominently continue to flourish. All of that awareness brings good news and bad news, but the real bad news is reserved for criminals, who will find it increasingly difficult to leave a crime scene without leaving a piece of incriminating biological evidence behind.