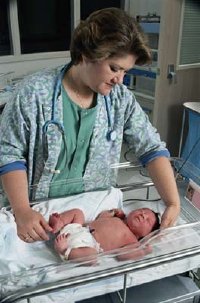 There are several different categories of genetic diseases that are divided by the type of gene or chromosome that transmits the disease.  The most common are autosomal recessive, autosomal dominant, multifactorial, x-linked recessive and chromosomal abnormalities.

In most cases, a woman who inherits a defective recessive gene from one parent and a normal dominant gene from the other parent does not exhibit any symptoms of that illness but is a carrier of that abnormal gene. However, if she has children with a man who is also a carrier, their children have a 50 percent chance of inheriting one defective gene and being nonsymptomatic carriers, and a 25 percent chance of inheriting two defective recessive genes and expressing the disease. This pattern is called autosomal recessive inheritance. The better-known of these disorders include sickle cell anemia, Tay-Sachs disease, and cystic fibrosis.

Anemia is sometimes caused by a deficiency of hemoglobin. Hemoglobin is the substance in red blood cells that carries oxygen to the other cells in the body. In sickle cell disease, the hemoglobin is abnormal. People who carry only one defective recessive gene usually have no symptoms of the disease. People who inherit two sickle cell genes develop many problems due to the structure of their abnormal hemoglobin.

Episodic clogging of the vessels with sickled blood cells causes tissue damage and pain, especially in the hands, feet, joints, and abdomen. Children with sickle cell anemia are prone to more frequent infections than children without the condition.

Because sickle cell anemia is most common among black persons, black adults are encouraged to undergo screening to determine if they are carriers of sickle cell anemia. Carriers can be identified by means of a simple blood test. Approximately eight percent of black people in the United States are carriers.

If both parents are carriers, they have a one in four chance of giving birth to a child with sickle cell disease. Sickle cell disease can be diagnosed before birth with the use of amniocentesis (see page 14 for an explanation of this procedure). In many states, most newborn babies are screened for sickle cell disease at birth by means of a blood test.

Tay-Sachs disease: Tay-Sachs disease is a metabolic disorder marked by the accumulation of a type of fatty acid in the liver, spleen, and brain. It is caused by a deficiency in the enzyme that normally degrades this fatty acid. After four to six months of normal development, children with Tay-Sachs exhibit deterioration in neurologic development. The disease progresses to mental retardation, blindness, and convulsions. Death usually occurs by age three or four. No treatment exists.

Preventive measures are available. The Ashkenazim, the Jews of eastern Europe, are disproportionately affected by Tay-Sachs, with nearly 100 times the rate of occurrence as other groups. Carriers have no symptoms of the disease and sometimes have no family history of the disease. It is recommended that all Jewish couples of eastern European descent undergo screening for the Tay-Sachs gene before they start their families. If both parents are carriers, diagnosis of Tay-Sachs disease in the baby can be made during pregnancy with the use of amniocentesis.

Cystic fibrosis: Cystic fibrosis is a serious childhood illness that causes the glands of the body to secrete abnormal sweat and mucus. The sweat glands secrete too much salt. The abnormally thick, sticky mucous secretions accumulate in and obstruct the lungs and pancreas. Since the pancreas is an important organ for digestion, these children fail to grow properly. The thick mucus in the lungs makes breathing difficult and leads to infections. Death is usually due to respiratory failure. Although no cure exists, improved treatment has brightened the prognosis of children with cystic fibrosis, giving them a good chance for survival into adulthood.

Cystic fibrosis is much more common in white people of northern European extraction. In the United States, approximately 1 in 29 white people are carriers. One infant in every 3,000 live births has cystic fibrosis. Traditionally, the disease has been diagnosed on the basis of sweat test results obtained only after the appearance of the symptoms. However, now diagnosis can be made before birth with amniocentesis.

In the United States, all newborns are screened for PKU by means of a blood test. Early detection and prompt treatment can prevent the mental retardation. Treatment consists of limiting a child's dietary intake of phenylalanine. If this dietary regimen is followed, children with PKU can have essentially normal development. Pregnant women who have PKU need to stick to this special diet to protect the baby's developing nervous system. All people with PKU must completely avoid the artificial sweetener aspartame, which contains phenylalanine. New research is in progress to help identify carriers of PKU and to diagnose PKU prenatally.