The Other Minnesota Twins 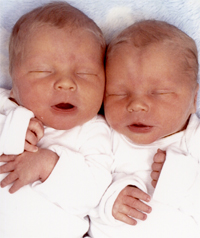 You take it for granted that you are a totally unique person, different from everybody else on Earth. And you understand that everybody else is also unique.

On a most basic level, identical twins are fascinating because they challenge this truth. They are unique people, of course, but they're eerily like each other.

Consider the extreme case of the "Jim twins." Identical twins Jim Lewis and Jim Springer were only 4 weeks old when they were separated; each infant was taken in by a different adoptive family. At age 5, Lewis learned that he had a twin, but he said that the notion never truly "soaked in" until he was 38 years old. Springer learned of his twin sibling at age 8, but both he and his adoptive parents believed the sibling had died. The two were finally reunited at age 39. The similarities the twins shared not only amazed one another, but researchers at the University of Minnesota as well. The very fact that you had twin siblings separated at birth bearing the same name, both 6 feet tall and weighing exactly 180 pounds is pretty incredible. But there's more.

Of course, before you start thinking about science fiction movies with pod people, the Jims, like other identical twins, are not carbon copies of each other. Some obvious differences were discovered during their participation in the "Minnesota Study of Twins Reared Apart," including:

The Minnesota study even included a set of triplets. Although raised separately, Bobby Shafran, David Kellman and Eddy Galland shared similar personalities. According to the book "Entwined Lives," all were described as, "intelligent, extraverted and slightly rambunctious." Bobby and Eddy were the first to meet, reunited by one of Eddy's college friends. Upon seeing a newspaper photo of his brothers, David immediately contacted his siblings and the triplets were fully reunited.

It's obvious from these twins' stories that genetics are certainly a factor in shaping who we are. In the next section, we'll see how such close genetic matches actually form.

The Minnesota Twin Study is probably the most well-known twin study to date. It's a four-part ongoing medical and psychological review of:

Through this study comes information about how our environment and genes work together to influence everything from attitudes, talents and abilities, to job selection, to falling in love, to aging and health. Research so far indicates that characteristics like personality are primarily related to genes. For more information about the study and its results, visit the Minnesota Twin Family Study website.