Do Twins Run in Families? 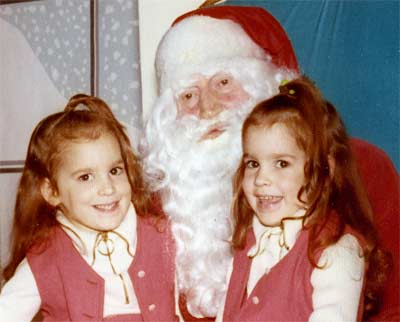 The author with her twin when they were children.
Katherine Neer

I'm an identical twin. My best friend from college is the daughter of an identical twin and she has identical twin nieces on her husband's side of the family. While working here, at one time I worked with another twin (he has a fraternal twin sister), a co-worker who has younger twin brothers and HowStuffWorks' founder was expecting identical twin boys. It's a curious thing when you seem to be surrounded by something like that. You begin to ponder, "Why do certain people have twins?" Seriously — what made my mother, my friend Melinda's grandmother and sister-in-law, Kevin's mom, Karim's mom and Marshall's wife have twins? And, if you're like me, or one of my twin-related friends, you might wonder, "Since I have a twin-family connection, am I more likely to have twins?"

Of course, there are all sorts of personal theories, stories and the like that claim to understand how twins happen. For example, you may have heard that twinning is hereditary. Maybe you've heard that if you're a twin, you can't have twins because it skips a generation. Perhaps you've even heard that certain foods will increase your chances of conceiving twins. Much like an urban legend that you hear repeatedly, so much so that "it just has to be true" - many people believe these statements because they've heard them all their lives.

Twinning is actually a bit more mysterious than that — well, monozygotic twinning is. Right now, we really don't know what causes MZ twins to occur. What we do know is that the birth rate of MZ twins is consistent throughout the world; for every 1000 births, approximately four MZ twin sets are born.

While MZ twins remain a mystery, scientists do have a better handle on what might cause dizygotic twinning. In fact, there are several key factors, including:

In order to produce DZ twins, the mother has to release more than one egg. The ability to hyperovulate (release more than one egg at a time) could be an inherited trait received from your mother. Furthermore, a DZ female twin is almost twice as likely to mother DZ twins herself as any other female. Increased ovulation can also be due to an amplified level of follicle-stimulating hormone (FSH). Studies indicate that levels of this hormone increase among heavy women and older women. With the U.S.' trend toward growing waistlines and older parenting, it's not surprising that the twinning rate has risen 38 percent since 1990, and 76 percent since 1980 [ref]. As of 2014, 33.9 twins were born for every 1,000 Americans.

Certain environmental factors also have an impact. Improved health care and nutrition certainly play an important role in the survival of twin fetuses. Another important factor in the increased rate of DZ twinning could be attributed to infertility treatment. Women who have trouble conceiving due to ovulation difficulties are treated with ovarian stimulation. This process can cause the woman to hyperovulate. Other treatments can be conducive to DZ twinning as well. For example, during in vitro fertilization, eggs that have been fertilized outside the woman's body are placed back inside her uterus. There is no guarantee that a fertilized egg will successfully implant itself in the uterine lining, so usually more than one fertilized egg is placed for possible implantation. If more than one fertilized egg does implant itself, multiple births will occur.

You already know that some of our nearest and dearest furry friends have multiples or litters (as they're more widely known). In fact, dogs and cats are usually expected to produce multiples. But what about other animals? The following can produce twin and/or multiple births: