Do Twins Have ESP? 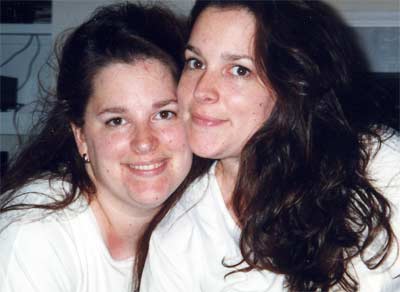 The author and her twin
Katherine Neer

Consider the following story: My identical twin sister, nicknamed "Fred," was hiking in Sabino Canyon while visiting our aunt for two weeks in Arizona. In the middle of the hike, she slipped and suffered a sprain, a few cuts and some scrapes and bruises. It took a little more than an hour to hobble back to the car and head home. Meanwhile, across the country in North Carolina, I was interviewing new wait staff at work. In the middle of an interview, I had an intense feeling of worry for no apparent reason. I was thinking of my sister and could not resist the urge to call and check on her. I excused myself from the interview to make the call, but got her voicemail. For another hour and a half, I couldn't shake the worried feelings. Later that evening, when Fred finally called me back, we discovered the "incidents" were within minutes of each other.

Now, this story: One day I was reminded of a college friend I hadn't talked to in two years. When I went home that evening, I mentioned this to my husband. He smiled and asked, "Have you checked the voicemail today?" when I did, I was surprised and pleased to hear a message from the friend I had been thinking about all day.

How do you explain these incidents? And why do I share them with you now?

One question that constantly surrounds twins has to do with the existence of a possible special connection the pair might share. Can they read each other's minds? Do they finish each other's sentences because they are truly telepathic? Do twins possess some shared form of extrasensory perception that the rest of the world doesn't?

Extrasensory perception (ESP) is a collective term for various hypothetical mental abilities. All of these abilities are based on the idea that human beings can perceive things beyond the scope of known bodily senses. ESP believers around the world have different ideas of how these abilities manifest themselves. Some people believe everybody possesses these abilities, and we involuntarily experience moments of ESP all the time. Others say only a handful of psychics, shamans or mediums have the special power, and that they can only access this power when they put themselves into a special mental state. And, there are those who believe this can be a special ability that is shared among twins, especially identical twins.

Now, let's consider the stories above. In the first story, the people involved are identical twins. In the second story, the individuals are not even related. So, are these random coincidences? Many scientists would say they are. In fact, results of various experiments conducted on twins testing for telepathy show no real indication that twins are any more connected in this manner than others are.

For example, in one experiment, one twin — the "sender" — was asked to select a particular card out of a group of cards. The sender was then told to concentrate on the image (a target) displayed on the card and try to communicate it telepathically to his twin. In a separate location from the sender, the "receiver" twin was then asked to pick a card. The results indicated that the receiver accurately picked the target card about 50 percent of the time. The test was readministered, but this time a research assistant picked the actual card from the deck and asked the sender twin to try to transmit the target image to the receiver twin. Again, the receiver twin was asked to pick a card. This time, however, the receiver accurately picked the target card only about 25 percent of the time.

The scientists believed the initial 50 percent accuracy rate was based on shared preferences rather than telepathic ability. The 25 percent accuracy rate during the second half of the test supports that theory. Because the "sender" actually selected the card during the first half of the study, the fact that the "receiver" twin accurately selected the same card 50 percent of the time simply could be based on the fact that the two would both be attracted to similar cards due to a shared preference for certain shapes, colors, patterns, etc. During the second half of the test, the research assistant selected the cards, not the "sender" twin — so that initial action of selecting something because of a particular preference was gone. The accuracy rate of 25 percent is no more significant than similar studies done using non-related individuals.

In another study conducted by Lindon Eaves and Krystyna Last, 34 sets of twins — including both MZ and DZ sets — were seated in separate rooms from their twins. Each twin was given an opinion survey and directed to answer the survey in the manner they believed their twin would respond. Once they completed the first survey, they were given the exact same survey, but this time were asked to fill it out with their own opinions. The results showed no conclusive support for telepathic ability. The twins were no more apt to predict the correct response than an incorrect one.

Even though these experiments show no indication of a special bond, there are other experiments that do indicate otherwise. These relationships are not limited to twins, but rather include siblings, mothers and their children, and spouses. This would lead us to believe that these connections are not really paranormal activity at all but instead normal results of living together and coming to know one another very well. In fact, what may appear to be a psychic connection could merely be a heightened ability of keen observation.

Your five senses are constantly noticing information, and your brain is constantly processing this information on an unconscious level. So, after living with someone for an extended period of time, you have probably stored countless amounts of information about that individual. For example, you might know — on a conscious or unconscious level — that your brother chews on his lip and scratches his nose right before he's going to ask you for a favor. So, if he approaches you and does those things without saying a word, and you immediately say something like, "What is it that you need me to do?" An observer might think, "Wow, she's reading his mind!" But, what you're really doing is simply noticing visual cues and running those against a database of information you have stored in your mind.

Still, much like the incidents described earlier, there are countless anecdotes of psychic or paranormal phenomenon between twins. Entire books are dedicated to the subject. For example, Playfair's Twin Telepathy includes accounts of everything from shared thoughts to shared tactile sensations (one twin is having a heart attack and the other has chest pains) to actual physical manifestations (like bruising) of what is happening to the other twin. But the biggest problem with anecdotes like these is that they are just that. Someone is telling another person about an event that happened previously. Short of watching a set of twins 24 hours a day, 7 days a week, indefinitely waiting for something like this to happen, there's no way to manage actually documenting such an incident. So, no matter how credible the source of the story, there will always be room for doubt. In fact, even though my twin and I have experienced some pretty amazing things — how can I know that it's singularly attributable to the fact that we're twins?

For more information about twinning, twins and related topics, check out the links on the following page.

These are some sources that we found useful in researching this article: