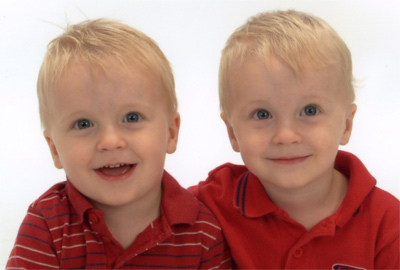 Children develop language skills in stages. From birth up to about six months old, your baby is like a sponge soaking up all the sounds in his or her environment. At first, the level, tone or quality of a person's voice is most striking. But by about the fourth month, your baby will start to hone in on certain sounds and will start making similar sounds himself. The gurgling, cooing and babbling you hear over the next five or six months will not be recognizable, but that doesn't mean your baby doesn't understand what you're saying. Many babies begin to associate words with the objects they represent long before the babies can articulate the words themselves.

After your baby turns one, language development can quickly move into high gear. Over the next couple of months, your child suddenly understands more than the simple word here and there. Full sentences and concepts are digested on the spot. As soon as you say, "We're going to the park," your little one starts to head for the front door. When you say, "It's about time for lunch," he makes his way to the kitchen. As quickly as his understanding of your language is growing, he's beginning to master several words himself. As birthday number two approaches, your baby's vocabulary will probably comprise 40 to 50 words. While this seems to be the norm for many singletons, it's not always true of twins. (Reportedly, about one child per 10 to 15 children has difficulty comprehending or developing language skills.)

The idea that twins develop entirely fabricated secret languages that only they use and only they can understand has long been a source of fascination for scientists and lay people alike. This is known as twin language, idioglossia or cryptophasia. In most cases, however, what the twins are speaking is not an entirely new or separate language. It's actually a matter of delayed or poor speech development in either one twin or both. Here's a possible scenario: Twin A has difficulty articulating certain sounds and thereby certain words. Although twin B is better able to articulate these sounds and words, he chooses to mimic or repeat the manner in which Twin A speaks. So, the two continue to talk this way, understanding what the other is saying but meanwhile it sounds like gibberish or some concocted language to you.

Why does this happen? There are a number of theories. For one, delayed speech in general is related to low birth weight and premature births. Statistics indicate that nearly 60 percent of twins and over 90 percent of higher multiples are born premature. Reportedly, the length of gestation decreases with each additional baby. An average single-birth pregnancy lasts 39 weeks. For twins that number drops, on average, to 36 weeks. And for triplets, quadruplets and quintuplets, it can range from 32 to 29 weeks respectively [ref]. Other factors include restricted one-on-one communication time with parents and twins' keen ability for non-verbal communication skills. Sometimes twins have more one-on-one communication time with each other, rather than with a parent or guardian. So, it seems reasonable that they would continue to foster close communication with each other - even if it entails using incoherent modifications of real speech.

So, is there really no secret language between twins? While research does indicate that the phenomenon most people think of as a secret twin language isn't what it seems, that doesn't mean there aren't twins and other siblings out there making up their own private words or codes.