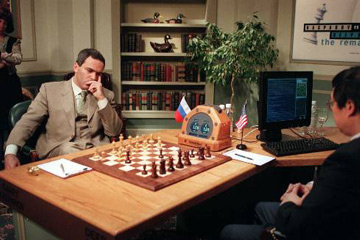 In 1997, world chess champion Garry Kasparov played a series of six games in a rematch against the supercomputer Deep Blue. The year before, Kasparov defeated Deep Blue, winning three games to one (with two draws) against the supercomputer. During the rematch, Kasparov won the first game but then began to struggle. When it was all over, Deep Blue claimed the victory with two wins against one with three draws.

In 2011, IBM's computer Watson competed against Ken Jennings and Brad Rutter on the "Jeopardy!" game show. Backed by more than 2,800 processor cores and a library's worth of information, the computer defeated the two human opponents. Watson showed that with the right processing power and programming, a computer could learn to interpret natural language and respond appropriately. It marked a leap in the field of artificial intelligence. Today, IBM is turning Watson's power to solving problems in the medical field and beyond.

Were these losses signs that computers had become smarter than people? It's true that computers can perform calculations at a blistering pace. The Sequoia supercomputer can perform 16.32 quadrillion floating operations (or petaflops) every second [source: Top 500]. How does that compare to the gray matter that's in our heads?

Measuring how fast humans can think isn't easy. Creative estimations are the best we can manage. Using visual processing as a starting point, robotics expert Hans Moravec of Carnegie Mellon institute estimated that humans can process about 100 trillion instructions per second (or teraflops) [source: Moravec]. But Chris Westbury, associate professor at the University of Alberta, estimates the brain may be capable of 20 million billion calculations per second, or around 20 petaflops [source: Westbury]. Westbury bases this estimation on the number of neurons in an average brain and how quickly they can send signals to one another. What's clear is that computer processing speed is at least approaching, if not outpacing, human thought. But are computers smarter?

Currently, computers fall short of possessing intelligence. But will that always be the case?