Computers and the Human Brain 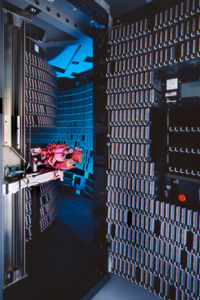 Massive supercomputers can perform trillions of calculations per second.
iStockphoto/Thinkstock

There's more to intelligence than processing speed. While a supercomputer like the Sequoia can analyze problems and reach a solution faster than humans, it can't adapt and learn the way humans can. Our brains are capable of analyzing new and unfamiliar situations in a way that computers can't. We can draw upon our past experiences and make inferences about the new situation. We can experiment with different approaches until we find the best way to move forward. Computers aren't capable of doing that -- you have to tell a computer what to do.

Humans are also very good at recognizing patterns. While we're making progress in machine pattern recognition, it's mostly on a superficial level. For example, some digital cameras can recognize specific faces and automatically tag photos of those people as you take pictures. But humans can recognize complex patterns and adapt to them -- computers still have trouble doing that.

Could computer scientists build a machine that simulates the way humans think? It's not as easy as it sounds. The human brain is incredibly complex. We still don't have a full understanding of how the brain works. Without this understanding, it's challenging to create a meaningful simulation of the brain.

One of the features computers would need to be more intelligent than humans is the ability to draw conclusions from observations. In a study published in 2009, computer engineers at Cornell University designed a program that could do this on a limited scale. The program gave the computer a basic set of tools it could use to observe and analyze the movements of a pendulum. Using this foundation, the software was able to extrapolate basic laws of physics from the pendulum's motions. It took about a day for the computer to arrive at the same conclusions it took humans thousands of years to grasp [source: Steele].

While the Cornell project was a remarkable achievement in computer engineering, we're still years away from computers that can make conclusions from general observations. The Cornell software gave the computer the tools it needed to draw conclusions -- the computer was unable to create or refine these tools for itself.

As long as computers rely on sets of pre-installed instructions to perform tasks, they can't be said to be more intelligent than humans. Even IBM's Watson can only respond to input -- it can't spontaneously pull up information or think in the way we humans do. Only when computers can adapt and perform tasks outside their initial programming will they be truly intelligent. Until that time, computers are just very sophisticated calculators.

Hundreds of computer scientists are trying to solve this crucial problem. Some are attempting to design computers that can mimic human thought -- a tricky situation considering we still don't have a complete understanding of how we think. Other computer scientists prefer to design systems that don't use the brain as a model. Futurists like Dr. Ray Kurzweil predict that it's just a matter of time before we develop a computer system capable of being self-aware. After that, we may see computers capable of recursive self-improvement. That means computers will be able to analyze their own capabilities and make adjustments to improve performance.

But creating a self-aware computer system is beyond our capabilities right now. It may not even be possible. While we continue to gain understanding in the fields of biology and computer science, we may encounter a fundamental obstacle before we can ever create a self-aware machine. Alternatively, we may come to a point where human and machine intelligence merge, leaving the entire question moot.

Learn more about artificial intelligence and computer science by following the links on the next page.